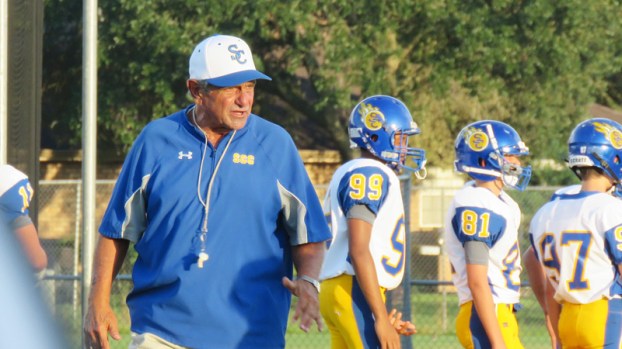 The Comets overcame a difficult start to 2018, rebounding to put together a six-game winning streak that ended SCC’s season one game short of a state championship game appearance.

St. Charles Catholic’s last loss was to a talented St. Thomas More, 49-7, but the result shouldn’t diminish from an otherwise successful year, one that ended with an 8-4 record.

The St. Charles Catholic Comets charge onto the field during a road game at Destrehan.

“We are battle tested,” coach Frank Monica said before his team’s last game. “There is no question about it. I’m very proud of my guys. The fact that we got the No. 2 power ranking speaks a lot about our schedule. Our kids are used to competition. There is nobody on our schedule that we are in awe of. I think our kids understand we built the program on playing up against good competition. That is how you get better.”

The Comets were led by their defense, only giving up 157 points on the season, with a third coming in the last game. SCC’s offense was a work in progress all year but came through when necessary to power the St. Charles playoff push.

Joe Chiarella (543 yards, seven touchdowns) and Phillip Tran (442 yards, four touchdowns) led the Comets from the running back position. Keenan Gauff came on late in the season with 390 rushing yards (8.5 yards per carry) and five scores.

Justin Dumas ran much of the Comets offense as the No. 1 quarterback, passing for 667 yards and three touchdowns. Taylor Miller was his leading receiver, hauling in 181 yards, while Jacob Ganote (135 yards) and Chiarella (143 yards) were also weapons out wide.

Before the season started, Monica said he knew his defense would play hard.

“I think we have a chance to be pretty decent on defense when all is said and done,” Monica said. “They like to hit people. I was encouraged by that.”