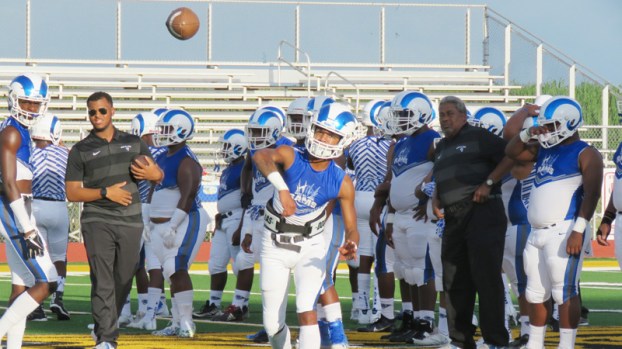 The most shocking stat from the entire 2018 high school football season may have been the zero points scored by West St. John High in the Rams’ semifinal loss Nov. 30 at Oak Grove.

It wasn’t for lack of trying or talented players; WSJH just happened to run into a team honed for muddy football and playing on the worst dirt swamp in Louisiana.

While no football fan on the West Bank enjoyed seeing the season end with 30-0, one game short of a state title appearance; it didn’t put a damper on a season and team that has proved to be the region’s best over the past two years.

The Rams followed up their 2017 state championship with a 9-3 record in 2018 and semifinal finish.

In the minutes immediately following the season-ending defeat, coach Brandon Walters took time to compliment his team’s talented senior class, which only lost five times since 2017.

“Without those seniors we would not have been able to have the success we had over the past two years,” Walters said. “(Running back Kylan) Duhe finished the past two years with almost 4,000 yards. This is a great team here. We’re going to miss all of those seniors. They stood tall for us. We wish them well and much success in the future.”

No player was more responsible for the success than running back Kylan Duhe.

Carrington Clark was the Rams’ leading receiver with 30 receptions, 657 yards and six touchdowns. Aaron Moll chipped in 14 receptions for 322 yards and four touchdowns.

The duo was also exciting as defensive backs, with Grow collecting 30 tackles and five interceptions, while Williams picked off three passes and registered 54 tackles.

When he wasn’t serving as a devastating No. 2 running option, linebacker Niko Roy was recording 90 tackles and three forced fumbles.

Before the season began, Walters said his group was battle-tested.

“They have been in some good games and some really great challenges,” he said way back in August. “We’ve been down a few times on the scoreboard and had to come back and win. They see it on different levels and different angles.”

The Rams proved that again all throughout 2018, leading the way as one of the River Parishes’ elite programs.

EDGARD — As the only 1A girls basketball team in the New Orleans region, the West St. John Lady Rams... read more