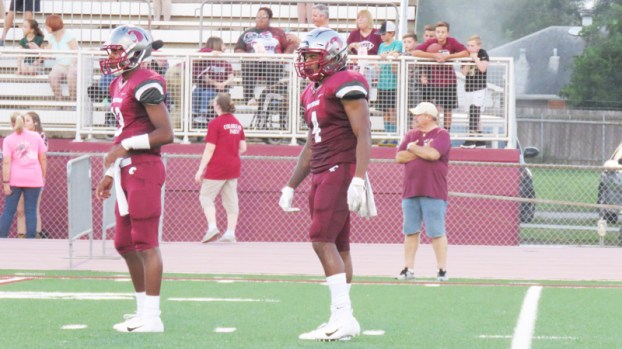 With quarterback J.R. Blood, left, and running back John Emery in the backfield, the Wildcats offense was a terror for opposing defenses all season.

Destrehan (12-2) scored 57 points in a home playoff game, but it wasn’t enough offense as the Wildcats lost their semifinals shootout to Zachary.

A Zachary touchdown just before halftime gave the Broncos a 33-30 lead at halftime, but Destrehan made the first big move of the second half when the Wildcats forced a fumble and Kyle Edwards cashed in, scoring on a short touchdown run to give DHS a 36-33 lead.

Unfortunately for DHS, Edwards had to shoulder the complete running load as Destrehan suffered a huge blow near the end of the first half, when LSU-committed running back John Emery suffered a lower leg injury that forced him from the game.

Destrehan fought its way back, however, thanks in part to some forced turnovers and two touchdown passes by J.R. Blood, to Koby Hollins and Carson Reider, respectively, to bring DHS within 10, 60-50, and with the ball with just under four minutes left.

There just wasn’t enough defense to win the game.

That was unfortunate, because 2018 might have been the best offensive football team head coach Stephen Robicheaux has had at Destrehan since 2007.

The senior only fumbled three times.

No slouch himself, Edwards carried the ball 112 times for 708 yards (6.3 yards-per-carry) for eight touchdowns.

Robicheaux said the greatest thing about Emery is how laid back and even-keeled he was during games and in the locker room.

The Wildcats running game was aided with the development of Blood at quarterback, who completed 178 passes for 2,573 yards and 29 touchdowns.

Defensively, middle linebacker Alex Huszar proved he was a perfect fit Malter Scobel’s defense by producing as a sideline-to-sideline playmaker, rocking ball carriers near the line of scrimmage and covering backs downfield.

To some, the 2018 Hahnville High football season was hijacked by the controversy that was the playing eligibility of quarterback... read more