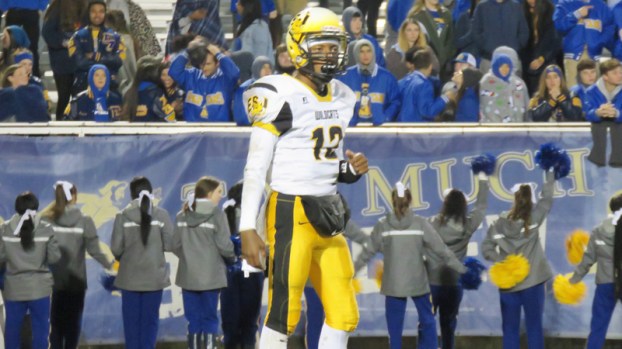 Sean Shelby looks to the sideline during the playoffs. The QB threw 16 touchdowns in 2018.

Brandon Brown began his East St. John High coaching career with a goal to bring the “E” back to prominence.

The massive success didn’t come in 2018 following a 5-6 record and first round playoff exit, but the competitive nature is back and so is the buzz.

“The important thing coming in here was building a culture and changing the mindset,” Brown said during the season. “We’re not going to just be an average football team. We’re going to do everything with championship status. It’s kind of hard to go to the bank and ask for something when money is not in there. Put in the work right now. When the time comes later on in the season, we can always go back to the bank and get back what we already put in.”

Brandon Brown returned to his roots this season.

Brown arrived at ESJH, following a head coaching stint at 2A St. Helena College and Career Academy, where the Hawks wrapped up 2017 with an appearance in the state championship.

The Wildcats’ season ended in heartbreak (like much of the season’s loses) when they fell 17-13 on the road to the East Ascension High Spartans in the first round of the Class 5A playoffs.

“I am extremely proud of my kids in the way they fought; the way they worked,” Brown said after the game. “Our kids fought the entire game. All the way until the last second, we had our chances and just didn’t capitalize.”

The loss snapped a three-game East St. John High winning streak and put a sour end on what had been an encouraging fall of football.

Reginald Foster Jr. is pictured on the Wildcats field this season.

“Now we just have to move forward and continue to get better as a program,” Brown said. “We’re just starting. I want my seniors to focus on that classroom, graduate and do everything to set themselves up for a good life. I’m proud of them.”

Following a disappointing 33-12 loss to Terrebonne Oct. 12, the Wildcats reeled off victories over Hahnville, Thibodaux and South Lafourche by a combined 119-28 margin to close the regular season.

“We didn’t finish games early in the season; you have to go out and do that,” Brown said. “I am very proud of our guys. They showed a lot of resilience. Early on, we had a bad start but we finished strong.”

Sean Shelby took over as quarterback halfway through the season, going on to pass for 1,829 yards and 16 touchdowns. He also ran for 236 yards.

Original starting quarterback Duke Crosby put up stats all over the field, throwing for 93 yards, running for 77 yards and catching 298 yards.

The Wildcats were led on defense by Welland Williams, Terrell Simmons and Matthew Billings.