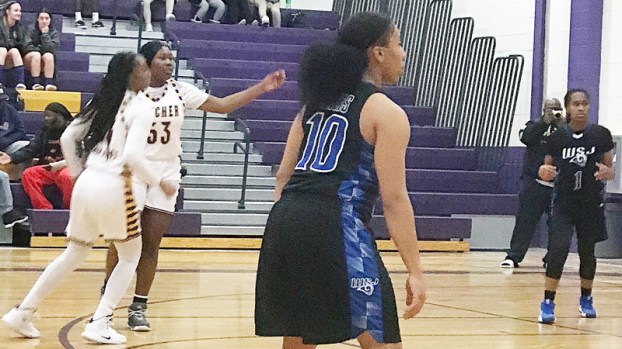 Stevante Hamilton looks to make a play during Tuesday’s action against Lutcher High School. Hamilton was the leading scorer of the night with 16 points.

EDGARD — As the only 1A girls basketball team in the New Orleans region, the West St. John Lady Rams are regularly pitted against teams from much larger schools.

They’ve held their own against tall challenges from 4A and 5A teams, exiting the week with an 8-3 record as of press time Friday morning.

According to coach Lester Smith, this year’s nine-girl squad is the same group that advanced to the regional round of last year’s playoffs, and he anticipates edging further toward the championship this time around.

“We had no seniors on the team last year,” Smith said. “This year, we have four. They’ve played together, so they know each other and feed off of each other. They have a more team-oriented identity this year than individual.”

Rather than chastising players for hogging the ball, Smith finds himself reminding the girls to take shots instead of passing when they have an opportunity.

The biggest struggle this season has been staying out of foul trouble, which becomes detrimental when strong players are sidelined.

“Because we only have nine girls, we need to try to get out of the first half with nobody in foul trouble to have a chance to win the game in the fourth quarter,” Smith said.

“We’ll make a silly little foul, and there’s not much you can do. We just have to stay focused mentally.”

The goals for the rest of the season are simple: Maintain a winning record, place first in district and roll through playoffs.

If the Lady Rams maintain their Top 10 power ranking, it will give them a better playoff draw than last year, when they ranked 18th and had to face No. 2 seed Merryville in the second round.

Junior Kylie Adams is at the forefront this season, leading the team in scoring at 15 points-per-game.

Though Tuesday’s battle against 4A Lutcher High School ended in a 41-50 loss, Hamilton came through in the clutch and put up 16 points. During last week’s 55-44 win over Riverside Academy, Hamilton collected an impressive 21 points.

The Lady Rams followed up with a landslide 51-8 victory over Phoenix High School in Plaquemines Parish Wednesday.

Hamilton and senior Nazel Breaux plan to continue their basketball careers at the collegiate level, according to Smith, though neither girl has decided on a school.

Breaux put up 14 points against Riverside and has averaged 10 ppg, Smith said.

“She’s probably our next best defensive player, and she’s also been shooting the ball well,” Smith said. “She’s doing better now with shooting than she has in past years.”

Rounding out the senior roster are Destiny Johnson and Miya Kelly.

Kelly is slowly reintegrating into gameplay after being sidelined for a year with an ACL injury, according to Smith.

Team defense has been a strong point this year, contributing to wins against large schools such as John Ehret, St. Scholastica, Lakeshore, East Jefferson and Eleanor McMain.

Even an early season loss against Fontainebleau was a success in terms of defense, Smith said, though there is always room to improve.

According to Smith, a 5:30 p.m. Tuesday home game against St. Katharine Drexel will test the Lady Rams, giving them a taste of playoff-grade competition.