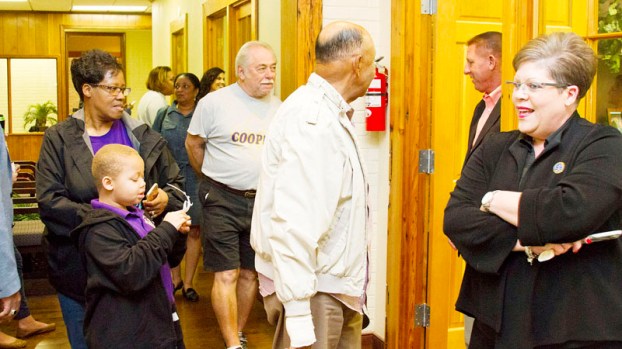 Monica Joseph, right, of the St. John the Baptist Parish District Attorney’s Office helps guide community members through the new and renovated Reserve D.A.’s office, which was opened Friday to the public.

“I wanted to see who the players are and see their passion,” Wright said.

“Knowing who does what at the District Attorney’s Office helps open a door. If something happens, you have people who you can go to. If we want them to be there for us, we have to support them.”

Wright said she appreciates the spirit of transparency she saw from more than 30 District Attorney’s Office employees during Friday’s tour.

Transparency was a motivation for District Attorney Bridget A. Dinvaut, who hosted the tour to make the public aware of services available to them while opening the doors of the new office at 1342 River Road in Reserve.

Attendees received handouts on the district attorney’s role as the chief law enforcer of St. John the Baptist Parish and the prosecutor in all misdemeanor and felony cases.

Louisiana Supreme Court Judge John L. Weimer attended Friday, noting it is important to him, as a father of three daughters, to support strong women in office.

Cybra Coleman and Rita Mae Johnson attended to get a firsthand view of the revitalization of Reserve.

Coleman in particular was interested to see the transformation of the District Attorney’s Office building, which once stood as a bank.

According to Dinvaut, the D.A.’s Office relocated from LaPlace to Reserve in March, providing an opportunity to save taxpayers money and consolidate departments under one roof.

Dinvaut spoke of lesser known services provided to the public, including expungement seminars held in the spring and the summer.

“A lot of times, people lose opportunities for jobs or housing because they have something on their criminal record,” Dinvaut said. “However, if the charge was formally dismissed, or if you were acquitted by a jury of your peers or a judge, you don’t have to face the downward consequences of having a criminal record.”

Dinvaut said the seminars provide information on eligibility for free expungement, which can also cover pardons for first-time offenses.

Seminar dates will be announced in early 2019.

Barriers to employment are broken down through the D.A.’s new crime preventive St. John P.R.O.U.D. Program, which links young adults ages 17 to 25 to lucrative careers.

Dinvaut stands by the law library, which is available for public use.

Former Sheriff Wayne L. Jones said the five graduates of the first St. John P.R.O.U.D. class, initiated in September, have all found employment. A second class is underway, and Jones said community members can call 985-652-9757 or visit the D.A.’s Office for a chance to enroll in future courses.

The District Attorney also provides a variety of resources for victims of crime, including tips on testifying and coordinated efforts to ensure victims receive restitution payments.

“We do try to make our victims as whole as possible, especially when they have a monetary loss as a result of a crime,” Dinvaut said.

Victims of domestic abuse may be referred to safe houses.

Those who want to brush up on divorce law, insurance law and other legal topics can take advantage of the D.A.’s Office extensive library of Louisiana’s revised statutes.

Louisiana Digest and Southern Reports books are also on hand for a more in-depth look on particular cases or topics.

“Every year, the pocket parts come in, so we maintain the books and keep them up-to-date,” Dinvaut said.

LAPLACE — When QHotels President Vimal Patel moved to the United States from India in the early 1990s, he experienced... read more