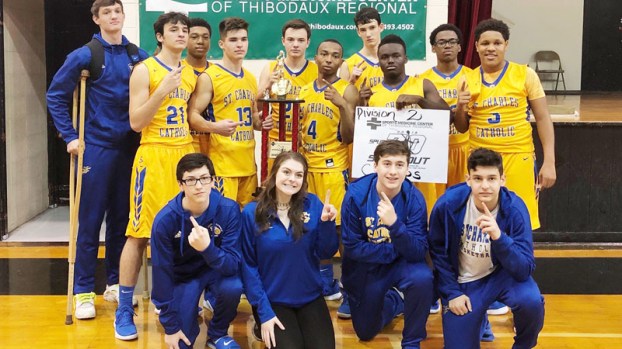 They were coming off of a disappointing 0-2 start, in which home-court advantage wasn’t enough to top 5A schools Destrehan and John Curtis.

Challenges aside, the Comets were reinvigorated when they reigned supreme among a playing field of 1A to 3A teams and took home the Spur 70 championship title.

Senior Jason Bosco’s stellar performance earned him a spot on the all-tournament team, according to coach Kemper Todd.

Jason Bosco gets ready to shoot the basketball during a tournament game this month. Bosco, a senior, averages 18 points per game and was recently named to an all-tournament team.

Bosco put up nearly half of the Comets’ combined points in games against Central Catholic and Berwick and has been the leading scorer throughout the season, averaging 18 points per game.

“That was a really big accomplishment for him,” Todd said. “When you’re without one of your biggest and best players, it was pleasing to know he understood, without being told, that he had to step up. He scored 24 and 25 points in two games and took a lot of that responsibility on his shoulders.”

The Comets stood at 5-3 entering the week after collecting wins against Thomas Jefferson and Northlake Christian and a loss against Archbishop Hannan over the weekend.

“We’re coming around nicely,” Todd said. “It’s a process, but we’re developing. I think our biggest strength is that we play together and try to be selfless.

“In all phases of the game, I’m very pleased with where we are. I don’t think anyone’s dissatisfied yet. We’re just focusing on everyday concentration and effort.”

Fighting to the end is a focus for Todd, who said he wants his team to compete with vigor to make every competitor feel they’ve “been in a war, regardless of the outcome.”

“Joseph Mamou has been a real floor leader for us,” Todd said. “He usually draws the toughest defensive assignment of the night.”

Juniors Owen Bourgeois, Justin Dumas and Tyler Delauneville are key players on the team, and Todd said Bourgeois is making a name for himself as an aggressive offensive player who averages eight rebounds a game.

“It helps to have someone who understands what we do who is young, energetic and hardworking,” Todd said.

“It’s been a thrill to have him around.”

The Comets play a 7 p.m. game against Ascension Christian Thursday at home.

LAPLACE — Ashlynn King is heading to the land of royals. The St. Charles Catholic senior leaves Dec. 26 for... read more