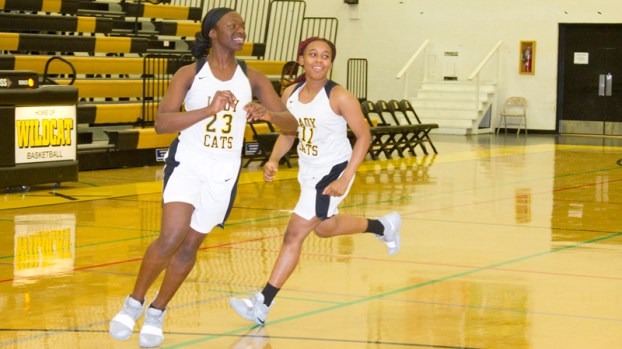 Kayja Jackson, who has scored more than 1,000 points in her high school career, runs a drill beside Alysha Soniat, right.

“Good things are destined to happen” for ESJH Lady Cats

LAPLACE — Youth has not inhibited the East St. John Lady Cats basketball team from dominating the court, and coach Stasha James is confident strong gameplay will make for a long, successful season.

The Lady Cats exited the week with a 10-2 record and a second place finish at a recent St. Mary’s Academy tournament.

“We’re extremely young,” James said, noting five freshmen have made appearances this season, along with two seniors and a handful of juniors and sophomores.

“We started doing some good things early in the season, and, somehow, we’re getting it done. That’s keeping me in good spirits the further down the season we get. Good things are destined to happen because we’re playing so well right now.”

For years, East St. John girls have been known for their speed on the basketball court, and this year is no exception.

Pushing the ball comes naturally and allows for easy transitions from offense to defense, James said. The girls have also been successful in connecting on two-point layups amid an open court.

However, James said defense could be improved with better in-game communication. Turnovers are still too high for James’ liking, and she sees vast room for improvement with free throws.

“Free throws aren’t horrible, but that’s something we’re working on because it could definitely be better,” James said.

“Then there are turnovers. We set a goal for eight in our last game and ended up still getting 12, but I can remember the first game when we had 44. We’ve really dropped that down.”

A winning record has raised the girls’ confidence, and James said the two seniors on the team are doing “exceptionally well” on offense.

Kayja Jackson recently topped 1,000 points for her high school career in the first quarter of her senior season.

“It felt like I accomplished something good,” said Kayja, who has played on the Lady Cats varsity team since her freshman year. She has hopes to play in college but is currently focusing on finishing high school strong.

“We’re not a team to play with,” Kayja said. “We apply a lot of pressure when we need to. We shouldn’t be underestimated.”

Senior Chari Julien is another standout averaging 10 to 11 points a game, James said.

James is especially impressed with freshman point guard Alysha Soniat, who she described as a great facilitator.

“When we competed in the St. Mary’s tournament, she looked like a college guard out there,” James said. “She was attacking the goal, making some real good passes and defending. By the time she gets to her senior year, she will be a standout top guard in the area.”

With juniors Kayana Adams and the 6-feet, 3-inch Darriyon Daniels returning from injury for Monday’s game against Edna Carr, James said the Lady Cats will be in good shape moving forward.