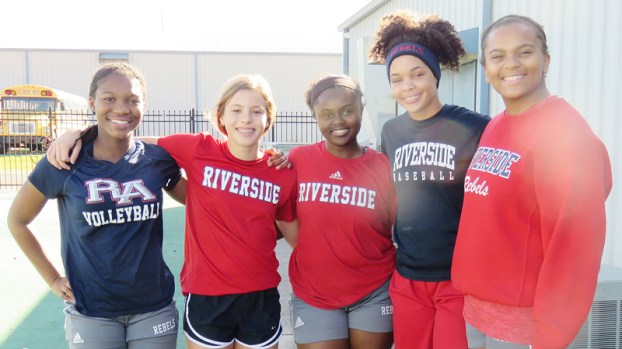 A disappointed head coach Kevin Dizer said the momentum seems to have fallen off track, as it remains a struggle to recruit and maintain talent.

“We were in a really good spot a year ago, and now it’s like we’re starting over,” Dizer said. “I don’t know what it is, but the challenge in this school is encouraging girls to come out and play basketball.”

The Lady Rebels opened the season last week with a narrow 35-34 win over Kentwood.

The team entered this week with a 2-2 record after suffering losses to Landry Walker and KIPP Booker T. Washington and collecting a win against South Plaquemines.

While the new girls are working on ball handling and shooting basics in practice, Dizer said the team’s silver linings are returning seniors Bria Neal, Kash’Mir Foley and Annie Wang.

Bria Neal said she and her senior teammates must encourage the squad’s younger players and always be there to answer questions. She likes how the team never gives up when on the court.

He credits the girls for building a positive culture within the Lady Rebels basketball program, which suffered from player apathy and low turnout at practices less than two years ago.

“We’ve got all of that cleaned up,” Dizer said. “None of it is an issue anymore. I look at Bria, Kash’Mir and Annie and think, this is their program.

“The success we had last year and the attitude of the girls on the team this year is a direct correlation to those girls buying in. I couldn’t be more proud of those girls sticking it out and continuing to work.”

Dizer expects Neal will lead the team on the court with raw athleticism. In the 2018 playoffs, Neal led in scoring and put up a combined 48 points in quarterfinal and semifinal games against Catholic-New Iberia and Notre Dame.

Basketball has been Neal’s passion since she was 4 years old. It’s a way to ward off stress, and each high-intensity game is a chance for her to have a blast with friends.

Though she isn’t set on a college, Neal plans to continue her basketball career in Texas following her high school graduation.

Until then, she’s ready to step up into a leadership role.

Kayla Fultz gets in some weight work Monday afternoon with Taylor Green, back, assisting. (Brooke Robichaux/L’OBSERVATEUR)

“We have a younger team this year, so I’ve got to guide them,” Neal said. “It’s about encouraging them and being there to answer their questions. Our team never gives up, despite all that happened last year when we lost in the semifinals. We are ready to keep going.”

“In terms of basketball, we have a long ways to go,” Dizer said. “I can’t hold that against the girls. We’re extremely inexperienced, but they fight the entire time. They have enthusiasm for the game.”