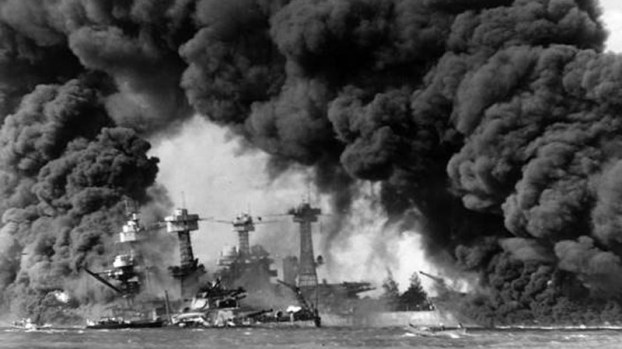 This attack on Pearl Harbor will always have a lasting memory where 2,403 Americans soldiers and sailors died in the attack, and another 1,000 were wounded.

Keller: Pearl Harbor anniversary is one to remember

You realize you’re old when you can remember exactly where you were 77 years ago.

The newsflash in Japan that day announced a state of war with the United States.

How could we ever forget, but many Americans have, that in all, about 2,500 people died in that tragedy.

One person, Mrs. Nancy Acosta, now deceased, never did forget. She was in Pearl Harbor as a 7-year-old and was ready to go to church when the action started, shortly after 7 a.m. Her dad was in the military and was stationed there.

I was 7 years old at the time and can recall that Sunday in 1941 like it was yesterday. I was sitting in the football stadium at Leon Godchaux High School with my father. I don’t remember who won the game, but I do recall Inez Madere Millet, in her band uniform, shouting to someone, “The Japanese have attacked Pearl Harbor!”

I remember listening to war news on the radio for the next three or four years. I remember my grandmother worrying because she had four sons serving their country.

I can still remember playing baseball in St. Peter’s schoolyard in 1943 when word came that one of my uncles was killed in Europe.

I know exactly where I was when I heard that the United States had dropped the A-bomb. I was at the Reserve Community Club swimming pool.

I remember the end of the war and the pride we Americans had. We were together. We had won the war.

If you ever get the chance, read the book the local school board published right after the war recognizing the 31 men from St. John who died during the war.

Let me encourage some of you who served during the war to share your experiences with our young people so they will never forget. We’ve had other wars in the past, and many men and women, unselfishly, gave their lives for our freedom. Let’s never forget the veterans.

America had always been able to pull together to fight the enemy. We were a strong and proud nation.

My concern is that we are in a war now and it’s taking place in America. The crime rate escalates as domestic violence, gang wars and drug abuse cause overcrowded jails that continue to plague society.

Abortion on demand is legal and sexual promiscuity is running rampant. Yes, America is a war zone and we are losing the battle. The reason is because we, unlike the Americans during the Second World War, refuse to come together and solve the problems that have weakened our once great country.

We must always remember Pearl Harbor, but come together and focus today on the battles we now face.

As a kid growing up in Reserve, I fondly remember the joy of having a Christmas tree this time of... read more