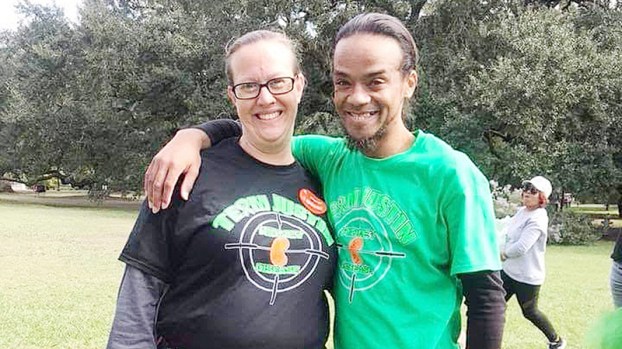 LAPLACE — A St. John the Baptist Parish man who suffered from kidney disease for seven years no longer needs dialysis, thanks to a successful organ donation from a selfless neighbor.

Justin James and Nanci Dozier were hardly more than strangers seven months ago. Now they are family, linked in more ways than one since last week’s transplant.

Their journey began in late May, when Dozier spoke to James’ mother, Tysha Martin, outside of their LaPlace homes.

When Martin mentioned James was waiting on a kidney transplant, Dozier’s offer to become a living donor was immediate and heartfelt. James needed a type O kidney, and she had one to spare.

This week, Dozier is recovering from her transplant at home, feeling sore but happy to have made a difference.

Justin James is seen last week on the morning of his kidney transplant surgery.

Dozier said the true impact begins this week with James’ discharge from the hospital.

“I don’t think the most rewarding part has happened yet,” Dozier said. “I think it will be when Justin is home and realizes he doesn’t have dialysis. The alarm on his phone will go off, and he can finally turn it off and delete that alarm.”

For the past seven years, James has endured dialysis for three and a half hours, three times a week.

The onset of James’ kidney disease came days before his 21st birthday, when he noticed irregularities in his urine, excessive thirst and extra weight in his face.

James was not available for an interview while in the hospital early this week, and he deferred comment to his mother.

According to Martin, there have been no complications since the surgery. James has an excellent prognosis, though the timeline for full recovery could take as much as a year.

“Nanci has blessed my child with hope for a better life,” Martin said. “I can say Justin does have plans to go to college. He’s been offered an internship with Big Frog of Hammond when he recovers.”

Martin said the internship involves T-shirt design, which has always been a passion for James. Throughout his kidney disease journey, he’s designed and sold “TEAM JUSTIN” T-shirts to lessen medical expenses.

It’s been a long battle that has felt hopeless at times, especially when he missed out on a transplant opportunity in the spring.

It wasn’t long after that Dozier came along.

In September, after undergoing multiple tests, she surprised Justin at his front door with a custom T-shirt announcing her eligibility to donate.

She proudly wore a custom T-Shirt reading “Mission Accomplished” when she was discharged Friday.

“Justin has always kept a positive attitude; strength to keep trudging through; the hope that one day it would happen for him,” Dozier said. “The first thing I wanted to do after surgery was go next door to his room and see how he was doing.”

Nanci Dozier gets ready to head home after surgery.

At home, it’s a similar story. According to Martin, the families often walk to each other’s houses. Last month, they teamed together for the National Kidney Foundation’s Kidney Walk in New Orleans, sponsored by AETNA Better Health, GoldStar Cleaning LLC and Regal Construction & Industrial Group.

“We talk every morning and afternoon,” Martin said. “We make each other dinner and make plans to do things together. Now I have a sister. We’re not neighbors anymore. We’re family.”

Dozier’s wish is for others to consider becoming living donors. For more information, visit kidney.org/transplantation/beadonor.

HAHNVILLE — St. Charles Parish officials are collecting toy donations until Dec. 10 for the patients of Children’s Hospital in... read more