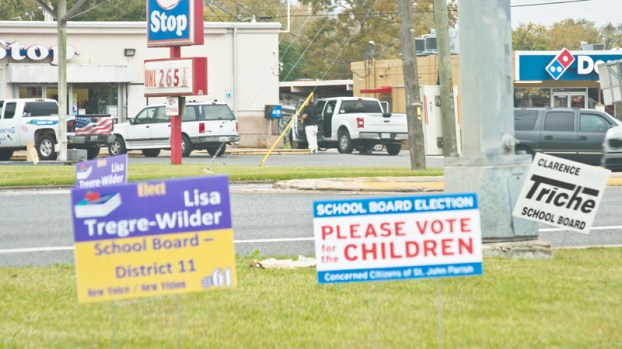 Political signs are seen near the corner of Airline Highway and Old U.S. 51. in LaPlace.

LAPLACE — St. John the Baptist Parish School Board candidate Lisa Tregre-Wilder was enjoying a celebratory anniversary cruise when she received a video from a campaign supporter reporting a sign stolen from his private LaPlace property.

It’s a trend that has continued since the week of the Nov. 6 primary election, when Tregre-Wilder noticed signs pulled off private property on Old U.S. 51, while others were left soaking in a ditch near Emily C. Watkins Elementary.

Tregre-Wilder replaced her signs when she returned from her cruise, covering School Board District 11 from Old U.S. 51 to the St. Charles Parish line north of Airline Highway and from Walnut Street to Bayou Steel south of Airline Highway, excluding Woodland Quarters.

Tregre-Wilder and District 11 incumbent Clarence Triche are the only candidates vying for a School Board seat in the Dec. 8 runoff election after neither claimed more than 50 percent of the vote in the Nov. 6 primary.

Triche took in 46 percent of the District 11 turnout with 601 votes, while Tregre-Wilder secured 38 percent with 492 votes, earning her a spot in the runoff.

Sign theft has also plagued Triche’s campaign in the weeks since the primary. In all, about 10 of his signs have disappeared or been cast aside, with the most recent incident happening on or before Monday.

“I had some stolen from Airline Highway near the River Forest area and from a few other little spots,” Triche said. “Signs were gone, but the metal holders were still there, so it wasn’t someone cutting grass. They were just taking the signs.”

Triche also said that prior to the primary, more than 1,000 mail-out fliers he paid for did not reach St. John Parish families, a mishap Triche feels added to lower-than-expected voter turnout.

In his 29 years on the School Board, Triche has never experienced these issues during election time, and he has no explanation for what happened.

“I guess someone doesn’t like me,” Triche said in reference to the tampered signs, noting he found some thrown into ditches.

It’s similar to what Tregre-Wilder reported, though she is skeptical that it happened to her opponent. According to Tregre-Wilder, Triche’s signs popped up in tact in areas where hers were knocked down or missing.

She said challenger Shondrell Perrilloux, who collected 16 percent of the District 11 vote in the primary, also had signs knocked down near Old 51.

“I simply don’t believe what he’s saying,” Tregre-Wilder said. “It might not have been him (who stole the signs), but we are ultimately responsible for our helpers, just like I’m responsible for the people helping my campaign.”

“I can guarantee I would not take her signs,” Triche said. “In fact, one of her signs was down next to mine, and I put her sign back up, too.”

The candidates have taken shots against each other in recent weeks, with Triche maintaining he has already accomplished Tregre-Wilder’s priorities to promote transparency, fiscal reform, school safety and certified teacher’s retention within the School Board.

Tregre-Wilder countered Triche’s qualifications by noting a lack of improvement within the school system during his tenure and uncertainty surrounding plans for future performance growth.

Perrilloux, who did not qualify for the runoffs, is endorsing Tregre-Wilder in the upcoming election.

“She has a vision to move the educational system forward by being more transparent,” Perrilloux said. “She has a vision of more parental involvement and offering afterschool tutoring. What she’s stated is similar to what I have envisioned as a candidate.”