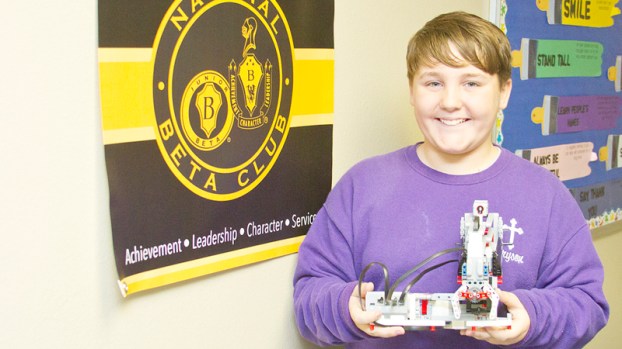 Ascension of Our Lord Catholic School’s Bryson Borne helped code a robot that picks up a ball and drops it down a ramp, setting off a chain reaction.

LAPLACE — At only 12 years old, Bryson Borne of LaPlace has a strong sense of self and the motivation to pursue his Catholic faith in all aspects of life.

Bryson, a seventh grader, found his faith when he started school at Ascension of Our Lord Catholic School three years ago. A non-denominational churchgoer at the time, Bryson told his family it was important to him to explore Catholicism by making his first communion and reconciliation.

When he gets older, Bryson looks forward to spreading God’s love in an unexpected way.

“I want to be a plastic surgeon,” Bryson said. “It’s about helping people feel more comfortable in the bodies God gave them. A lot of people are insecure, and that could help them feel more confident.”

Bryson volunteers as an altar server at Ascension of Our Lord Church on Sundays and at his school Mass on most Fridays.

Every so often, he’s selected by school leadership to serve at weddings or funerals.

School counselor Christine Escobar said Bryson feels responsible for AOL and the success of his fellow students, and he always suggests ways the school can improve.

“If he sees a friend that’s not doing well, he’ll say, ‘how can we make this better?’” Escobar said. “He’s an all-around good kid who wants to live by the Catholic faith, and he’s trusted AOL through that process.”

Bryson Borne sits at the WAOL desk, where he helps deliver morning announcements.

Escobar said Bryson’s parents, Jason and Jessica Borne of LaPlace, helped him become an independent thinker by letting him make his own decisions.

“Both of my parents motivate me by helping me study and keep good grades,” Bryson said.

“He sets a good example for others as far as behavior and being a good person,” Dauenhauer said. “He’s good at making people laugh and feel good about themselves. He’s not a follower. He’s his own person who does what he thinks is right, regardless of what other people say or do.”

Bryson isn’t interested in the video games his peers play, but he enjoys studying technology that brings electronics to life.

He’s representing AOL’s Beta Club in robotics and engineering competitions at District Day this weekend. Using Lego Mindstorms software, he helped code a robot that picks up a ball and drops it down a ramp to set off a series of chain reactions.

Technology is essential to Bryson’s role in the WAOL news broadcast club, a campus group in charge of delivering televised morning announcements.

Math has always been Bryson’s strongest subject, and he’s been on honor roll each year since kindergarten.

He’s a member of Student Council and a dedicated member of AOL’s Swim team, where he competes in freestyle and breaststroke. During summers at Riverlands Country Club, Bryson also swims backstroke.

Outside of school, Bryson attends camping trips with his Boy Scouts troop in hopes of attaining the prestigious Eagle Scout title by the time he’s 17. Bryson also enjoys riding bikes with friends, spending time with younger sister Brianna and caring for his four pets.