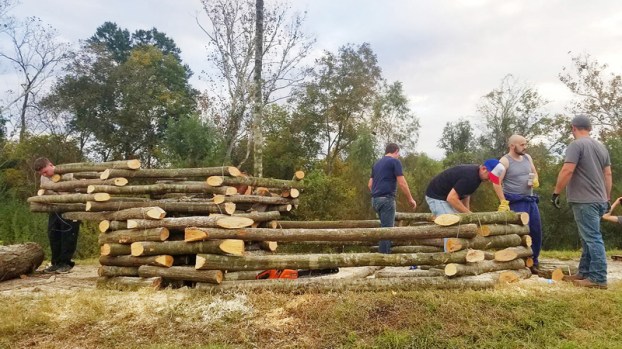 Sammy Clement, Wayne Weidert, Brian Hassell and Troy Torres work together to build a pelican bonfire, which will be lit on Christmas Eve.

GARYVILLE — The talented bonfire enthusiasts behind last year’s colossal alligator snapping turtle are returning to light the levee with another Louisiana favorite.

A 15-foot-tall animatronic pelican will dazzle a crowd of onlookers at 7 p.m. this Christmas Eve (Dec. 24) as it goes up in flames near South Church Street in Garyville.

Before cars and streetlights lined River Road, residents would light a path to midnight Mass by burning bonfires along the levee each Christmas Eve.

Others say the bonfire tradition was created to guide Papa Noel as he delivered toys to the good boys and girls of St. John the Baptist and St. James parishes.

To Josh Weidert, bonfires are a family tradition of hard work and creative passion.

Weidert is part of Blood, Sweat and Bonfires, a local group of lifelong friends who seek to preserve bonfire culture.

“When we were old enough, about 12 or 13, we got our bonfire permit from the parish and started hitting the levee with basic four-pole teepee structures. As the years progressed, we got on with building bigger and better things.”

Parish regulations now prohibit bonfires taller than 15 feet for safety reasons relating to barges traveling down the river, according to Kilburn.

While their fathers mainly stuck to teepee-shaped bonfires, the Blood, Sweat and Bonfires diverged from the norm when they began experimenting with shapes in the early 2000s.

Last year’s alligator snapping turtle bonfire attracted tourists from across the nation and from nine countries around the world.

The first few attempts failed and were demolished. In 2008, the group finally mastered a custom design: a bonfire shaped like a No. 1.

In the 10 years since, the group has created bonfires in the shapes of a Saints helmet, a beer bottle, an electric guitar, the historic Garyville bank, a space shuttle, a breast cancer ribbon, a fish, a crawfish with pinching claws and a snapping turtle with a moving jaw.

This year’s pelican will include moving pieces and is expected to be complete by the second week of December.

What amazes Kilburn most is how the tradition has grown, attracting families from as far away as Germany and Switzerland in 2017.

“What got me the most is a family in Missouri saw it on the news last year, and they drove all this way to come see it on Christmas Eve,” Kilburn said.

According to Weidert, tourists from 34 states and nine countries signed the guest book last year.

“When we lit that turtle off last year, we probably had close to 200 to 300 people out there, not to mention the people standing on the other side of the road and the cars parked on River Road watching us,” Weidert said.

Most of the group members have experience in construction, and Weidert has a knack for art and design.

Beginning on Thanksgiving each year, the group obtains permits and heads to the woods to chop down trees, saw the logs to size and load them by hand into a truck, Kilburn said.

“It ain’t no joke,” Kilburn said. “Building bonfires is a lot harder than what people think.”

Visit Blood, Sweat and Bonfires on Facebook for updates and history tidbits.

LAPLACE — The St. John the Baptist Parish Council awarded a janitorial contract for the new government complex to the... read more