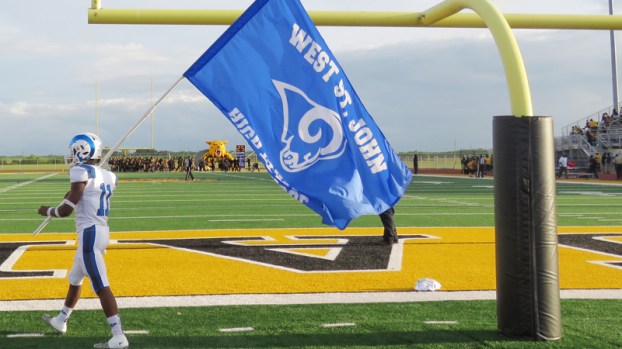 Senior defensive back Jeremiah Downing is seen carrying the West St. John High flag before the Rams’ first game of 2018. WSJH is one road victory away from taking that flag back to the Superdome and an appearance in the state championship game.

EDGARD — The best are playing the best.

Sporting an impressive 12-0 record and No. 1 seed in the 2018 LHSAA Class 1A Playoff Bracket, Oak Grove can conceivably claim “best” status.

However, West St. John High fans can point to the Rams’ impressive 9-2 record and status as defending LHSAA Class 1A state champs for a reasonable claim to the “best” moniker.

Now, it’s time to settle it on the field.

The Rams are looking at a four-and-a-half-hour, 250-mile one-way trip to play in the semifinal showdown. Fortunately for the Rams, they just made a similar trip last week as part of their 24-23 road win over Logansport.

“It’s the same distance as going to Logansport; we’re just going in a different direction to Northeast Louisiana,” WSJH coach Brandon Walters said. “I think our kids will do fine with the adjustment as far as being on the road and having to travel like that. I think they are pretty focused and ready to go.”

Although he has never led a football team to Oak Grove, Walters did make the trip there in May to watch his daughter’s softball team battle in a second round playoff game.

Rams quarterback D’Andre Gaudia, coming off one of his best games, will need to stay on target for West St. John to win a second straight road game.

Taking distance out of the equation, field conditions could be West St. John High’s No. 1 concern.

Oak Grove’s field was a near mud pit last week when the Tigers defeated Oberlin 14-8.

Walters said he has been in touch with Tigers coaches about field concerns.

“It was really muddy before they even started playing the game,” Walters said. “I know they have had some weather up there, but the coach kind of assured me they would take care of the field. It seems to be in pretty bad shape as far as what it looks like, pretty sloppy and slippery.”

The Tigers are averaging more than 41 points-per-game, with last week’s showing the only time since Week 3 when they’ve failed to score at least 33 points.

“We have to be able to stop the run game,” Walters said. “They are going to pound the ball. That’s what they do. That’s their forte. That’s what’s gotten them here. We’re going to get their best shot.”

The Tigers boast a stable of talented runners that usually do damage from the I-formation. Oak Grove coaches add some twists to the attack by placing their running back at least 10 yards off the ball to create a running, downhill start.

The variations expand from there with fullback leads, options, fullback traps and dives. Double tight end looks are also common.

More worrisome to most Oak Grove opponents has been the Tigers defense, which is giving up less than 7 points-per-game in the last three contests.

“We just have to focus on getting out and starting early,” Walters said. “I believe that if we start early, we’ll have a good opportunity to set the tempo for what we need to do.

“Last week, we we’re able to get into the red zone three times early, but we didn’t punch it in when we got there. The key for us is to start fast and cash in. We have to maximize every possession.”

Quarterback D’Andre Gaudia is coming off, possibly, his best game of the season, having engineered 171 yards passing, 76 yards rushing and three touchdowns, including the game winner with less than 10 seconds left in the ballgame.

Walters said his players are hungry and “see the light at the end of the tunnel.”

“We’re not going to change up anything,” he said. “We’re going to continue to work the way we normally do, treat this week the same way and be ready to go by Friday.”

LOGANSPORT — West St. John High is one game away from playing for a second consecutive state championship. The lower... read more