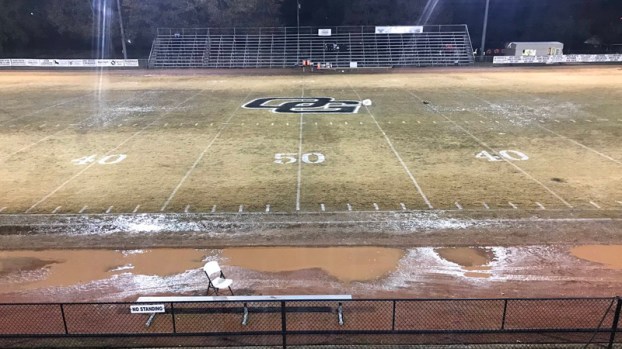 The field conditions before the game at Oak Grove left something to be desired for sports fans.

OAK GROVE — The West St. John Rams (9-3) season came to an end one game short of the Superdome.

The defending 1A state champions lost Friday night on the road to undefeated Oak Grove, 30-0.

What should have been a matchup of two of the state’s best teams was marred by some of the worst field conditions in Louisiana.

The “grass” field was covered in mud from the sideline to the midfield decal with puddle-deep water making things hard for many to walk, let alone play football.

“They said they treated the field and put some stuff down, but that wasn’t the case,” Rams coach Brandon Walters said following Friday night’s game. “It was extremely muddy. You couldn’t walk, let alone run.

“They were ready for it. They made the plays they needed to make on the same field so we can’t make those excuses. They were a better team tonight. They beat us and had us in the right conditions to do that.”

Take the two teams out of the slop and pit them against each other with neutral field conditions and things could have turned out differently.

Unfortunately for Rams fans, that was not the case.

“I think if we played them anywhere else, not in these conditions here, this is a different game by far,” Walters said. “We just couldn’t get anything going up front on either side and that’s what happens.”

Walters took time to compliment his team’s extremely talented senior class, which only lost five times in the last two years en route to a state championship in 2017 and semifinals appearance in 2018.

“Without those seniors we would not have been able to have the success we had over the past two years,” Walters said. “(Running back Kylan) Duhe finished the past two years with almost 4,000 yards. This is a great team here. We’re going to miss all of those seniors. They stood tall for us. We wish them well and much success in the future.”

Oak Grove controlled much of Friday’s game, scoring on the opening kickoff following a seven-minute plus drive that included a two-point conversion.

The game was effectively sealed when Oak Grove added another touchdown and two-point conversion with a minute to go before halftime, entering intermission with a 16-0 lead.