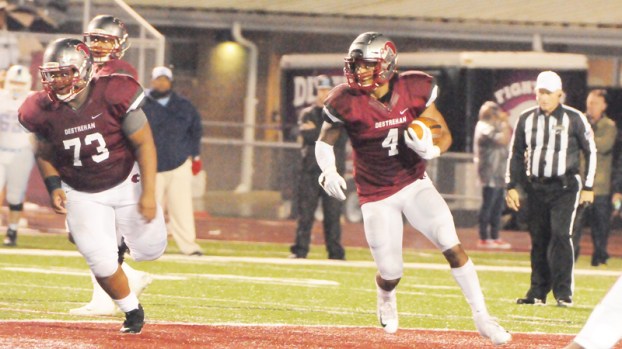 Destrehan High’s John Emery, No. 4. finds an opening during the first half of DHS’ semifinal playoff game Friday with Zachary. The Wildcats lost 67-57.

DESTREHAN — Destrehan’s season came to an end Friday night after 60 minutes of football that saw the Wildcats and Zachary Broncos unleash all of their artillery on one another for all four quarters of their Class 5A state semifinal.

Zachary emerged a 67-57 winner at Wildcat Stadium, advancing to next week’s 5A championship game to take on No. 1 seed West Monroe.

It was a rainy night — particularly in the second half, when the hardest of it fell — but it certainly didn’t stop either team from making big plays on either side of the ball.

A Zachary touchdown just before halftime gave the Broncos a 33-30 lead at halftime, but Destrehan made the first big move of the second half when the Wildcats forced a fumble and Kyle Edwards cashed in, scoring on a short touchdown run to give DHS a 36-33 lead.

But Edwards was in for the entirety of that first Wildcats drive as Destrehan suffered a huge blow near the end of the first half, when LSU-committed running back John Emery suffered a lower leg injury that forced him from the game.

The Wildcats (12-2) had a chance to take control after forcing an apparent punt, but Zachary faked and Sean Burrell ran for a 35-yard score to give the Broncos the lead.

Then Zachary (12-2) gave itself some breathing room when James Weatherspoon made a big defensive play, stripping a Destrehan receiver and returning it for a touchdown to put ZHS ahead 47-36.

Zachary took a three-score lead on Chandler Whitfield’s 81-yard end around for a touchdown, making it 54-36.

Destrehan fought its way back, however, thanks in part to some forced turnovers and two touchdown passes by J.R. Blood, to Koby Hollins and Carson Reider, respectively, to bring DHS within 10, 60-50, and with the ball with just under four minutes left. But Zachary stood firm defensively, and a Blood fourth down pass sailed incomplete with 1:56 remaining to all but seal the win.