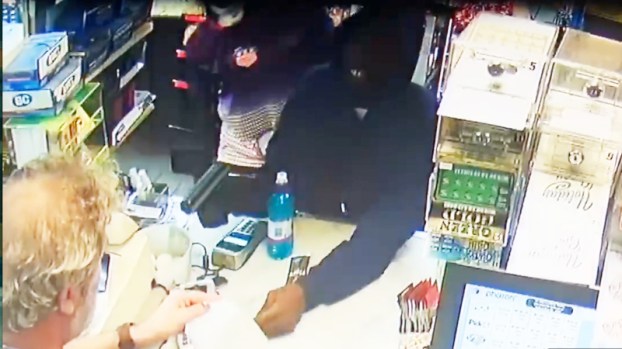 LAPLACE — A Belle Terre Boulevard convenience store was robbed at gunpoint Monday morning, and authorities are asking for the public’s help to locate a suspect.

The St. John Parish Sheriff’s Office said the armed robbery took place at 4:45 a.m., and video from the scene shows the gunman threatening the store clerk and a customer before leaving the scene with cash.

Only one person is believed to have committed the robbery, Sheriff Mike Tregre said Tuesday afternoon, noting police think the gunman may have left the scene and immediately exited St. John the Baptist Parish via Interstate 10.

According to police, no one was injured during the robbery.

Police are asking for help identifying this man.

Police released video surveillance from the convenience store showing the crime in action, as well as a still photograph of a suspect.

According to the Sheriff’s Office, the man pictured in the photograph is believed to be the gunman.

Anyone with information about the identity and whereabouts of the man pictured is asked to call the Sheriff’s Office TIPS line at 985-359-8477, the Criminal Investigations Division at 985-359-8722 or Crimestoppers at 504-822-1111. Citizens can also submit tips at stjohnsheriff.org/submitatip.php.

RESERVE — Speeding is cited as a major factor of a fatal weekend wreck in St. John the Baptist Parish,... read more