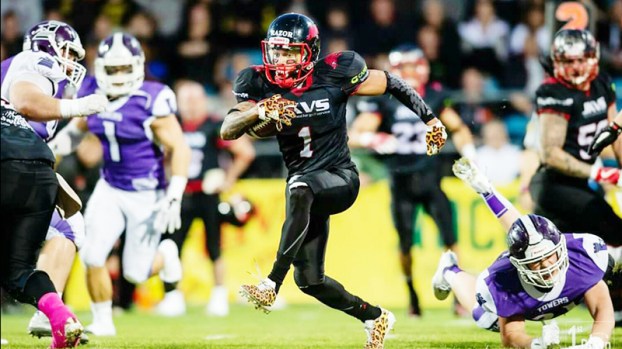 Moll was named the 2018 MVP of the European League his first year playing for the Denmark Triangle Razorbacks, but he now has a life altering decision ahead of him.

While he’s being offered more money to stay in Denmark, his gut is pulling him toward an Alliance of American Football opportunity that could propel him to the NFL.

Set to launch in February, AAF is a new eight-team developmental league with a CBS television contract.

“It’s not all written in contract yet, but I’m going up to Memphis Dec. 8 to see about it,” Moll said. “The AAF is the closest thing to the NFL right now. If I do well in this league, I could be in the NFL next year. I would love to play for the Saints. It’s always been my dream.”

Moll is an experienced wide receiver and cornerback who received 22 athletic awards in football, baseball and track upon graduating from WSJH in 2012.

Moll, seen at right, is traveling to Memphis to discuss playing in the upstart Alliance of American Football league.

During his scholarship career at Jackson State, Moll collected more than 1,300 receiving yards, 118 receptions and 12 touchdowns.

Living in Denmark turned out to be a greater adventure than expected for Moll, who said the experience made him a more cultured and passionate person. Compared to the United States, Denmark has less violence and less inequity between social classes, according to Moll.

Playing football in Europe reminded Moll of the St. John the Baptist Parish recreational teams he played in as a child, where having fun was the top priority.

Denmark Triangle Razorbacks practices were mandatory only a couple of times a week, as most players dedicated time outside of football to their jobs and families.

“Back home, football is more of a business,” Moll said. “There’s always someone trying to get your spot. You have to work extremely hard to keep up with everybody else.”

However, Moll enjoys the competition. Since high school, he’s worked to prove wrong those who discount him for his size.

“St. John Parish is a unique place,” Moll said. “The way that most children have to grow up, we kind of find a way out through sports. We develop certain skills and abilities that other children don’t.”

West St. John High coach Greg Joseph has been a longtime mentor for Moll, and the two still keep in touch.

Joseph said Moll is the type of young man any parent would want their son to be.

“He’s that kid who worked hard in everything he did,” Joseph said.

“I always say, follow your dream, but when that dream ends, it ends. There are a lot of other things in the world I know he can be successful in. Whatever he chooses to do in life, he will be superior.”

Moll’s love for football followed the legacy of his older brothers, John and Jeremy Moll. He’s always had the motivation of his parents, Pastor Eldridge Moll Jr. and Dena Moll, and the energetic support of his sister, Aneka Moll.