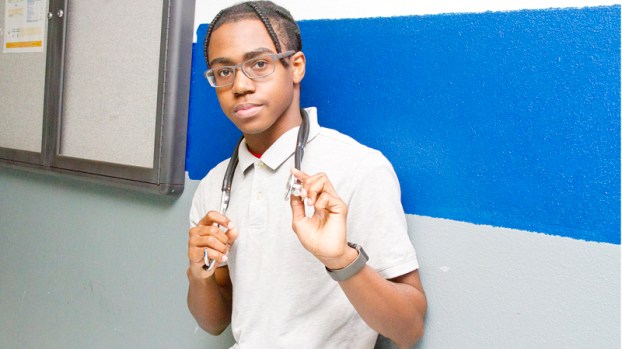 Looks Bright: WSJH’s Cairon Becnel wants to use steady hands as a neurosurgeon

EDGARD — From the time he started watching Grey’s Anatomy in middle school, Cairon Becnel has seen scrubs and operating rooms in his future.

Cairon is humble and studious, and he’s determined to become a successful neurosurgeon.

“I need to have focus, steady hands and patience,” Cairon said.

“My sister went to Xavier and studied pre-med biology, so I guess I’m also a little biased from her.”

Tiffany Becnel, right, said her son, Cairon, has the biggest heart of anyone she knows, which will serve him well.

Though his sights are set on Xavier, Cairon has applied to more than a dozen schools, and he recently became a West St. John Trailblazer to assist classmates in applying for college and financial aid.

Cairon’s mother, Tiffany Becnel, said her son is strong-willed when it comes to achieving his goals.

“Every mom thinks their kid is perfect, but I can honestly say that if he’s not, he’s close to it,” Tiffany said.

“I have no doubt that he is going to succeed. He’s focused and determined, and he has the biggest heart of anybody I know. I think that’s one of the things that will make him an awesome doctor.”

Cairon once had a love-hate relationship with school and resisted getting out of bed in the morning. Those habits eventually gave way, and each year that passed fostered Cairon’s knack for learning.

In seventh grade, he was valedictorian of his graduating elementary class.

He’s likely repeating that trend in high school, as he’s currently ranked first in academics among his senior class.

Cairon was nominated to represent West St. John in English in the district literary rally at Nicholls State University, though he considers it his weakest subject.

Outside of school, Cairon is active in his Christian Youth Organization.

“Every year, we go to these conventions,” Cairon said. “There was one we went to in New Orleans. We always have Mass with others, sing church songs and do church-related activities.”

According to Tiffany, Cairon is a lector in church and a frequent volunteer at festivals and family days.

“I’ve never had to worry about him following the wrong crowd because he’s so strong-minded,” Tiffany said.

She said Cairon is a great role model to his 14-year-old brother and his two young nephews.

Cairon said his father, Clifford Bailey, and his grandmother, the late Gail Becnel, have been major influences in his life.

Cairon Becnel, currently ranked first in his senior class at West St. John High, is looking to attend Xavier University next academic year, with plans to become a neurosurgeon.