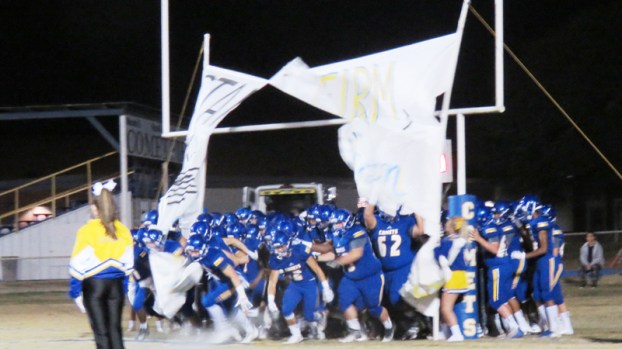 The St. Charles Catholic Comets burst onto the field just before kickoff of Friday’s playoff game.

The game was still close early in the second quarter with St. Charles Catholic trailing 14-7 and driving in enemy territory, but two penalties pushed the Comets out of scoring range and forced a punt.

“Our offensive and defensive lines were giving up too much ground,” Monica said. “I was a little disappointed in the way our season ended. Give them credit though; they are on a different level than we are. You could tell the difference. They played like a top-notch 4A school. Their quarterback was real good and on point.”

Monica said he knew his team was outmatched and would need to rely on some out-of-the-box formations and plays to keep the game close.

“We couldn’t line up our kids correctly during a lot of the ballgame,” he said. “Offensively, we were just a total mess, turning people loose at the line of scrimmage. Our bread and butter is rushing the ball through ball control and we couldn’t do that tonight.

“They are an explosive offense, and we didn’t think field goals were going to win it. We knew we had to score some touchdowns and, more importantly, control the line of scrimmage. Our defense took far too many snaps. I didn’t like our practice week of preparation. Basically, they just manhandled us. They took it to us in the line scrimmage.”

Running back Phillip Tran scored the Comets touchdown via a two-yard plunge with a 9:05 left in the second quarter.

Veteran head coach Frank Monica walks the Comets sideline during the first half on Friday.