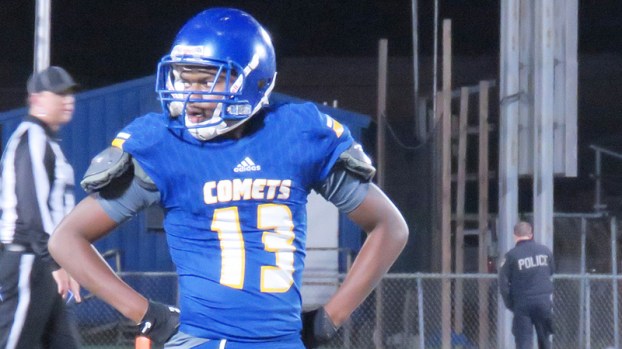 Sophomore defensive back Kamren Campbell looks to the sideline during the second half of the Comets’ playoff game last week against Parkview Baptist.

LAPLACE — The Comets were 2-3 following a 19-point home defeat Sept. 28 to East Ascension.

SCC coach Frank Monica noted his team was on “life support,” and it was up to the players to see how they would respond.

St. Charles Catholic rallied to produce a six-game winning streak and earn the No. 2 seed in the LHSAA Football Division II Playoff Bracket. That hard work also guaranteed this Friday’s semifinal contest against one-loss St. Thomas More is going to be played in LaPlace.

“We are battle tested,” Monica said. “There is no question about it. We are a step away from the Superdome and we will give it our best shot. I’m very proud of my guys. The fact that we got the No. 2 power ranking speaks a lot about our schedule. Our kids are used to competition. There is nobody on our schedule that we are in awe of. I think our kids understand we built the program on playing up against good competition. That is how you get better.”

This week’s competition comes in the form of the potent Cougars of St. Thomas More (10-1).

“They are very good, averaging 53 points a game against some quality opponents,” Monica said. “They have a 6-foot, 6-inch quarterback, explosive receivers and explosive running backs. We have our hands full. We have to find a way to slow them down and get the game in the fourth quarter.”

The Cougars routed E.D. White 63-7 last week to advance to the semifinals, taking the game out of reach almost instantly in scoring on a 67-yard touchdown pass and 54-yard punt return in mere minutes.

Quarterback Caleb Holstein is known for accurate passing on bubble screens and hitches to the outside and deep balls down the middle.

“Then when you get caught up with that, they spread the box and run a big running back at you,” Monica said. “You have to pick your poison about what you’re going to try and stop. I don’t think you stop them; you just try to slow them down.”

Tackling receivers after receptions is key for Comets defenders who must eliminate yardage after the catch at all costs.

Offensively, SCC must create first downs, as much to put itself in scoring position, as well as keeping the St. Thomas More offense on the sideline.

“We have to run the ball inside and out if we are going to be any good with our control passing game,” Monica said.

“We’re going to have to steal some possessions some kind of way. You have to be very sound in special teams.”

According to Monica, the Cougars have only punted eight times in the last seven games and are averaging 75 plays-per-game, compared to the Comets’ 50 plays-per-game.

“Our kids need to be mentally prepared,” Monica said. “We have them at home and on grass. They are used to playing on turf. I don’t know if that is going to be any equalizer, but we’re going to have to play one of our better games just to survive.

“When you get this deep in the playoffs, it’s all player driven. The team that handles the (Thanksgiving) week best is the team that can win the football game.”