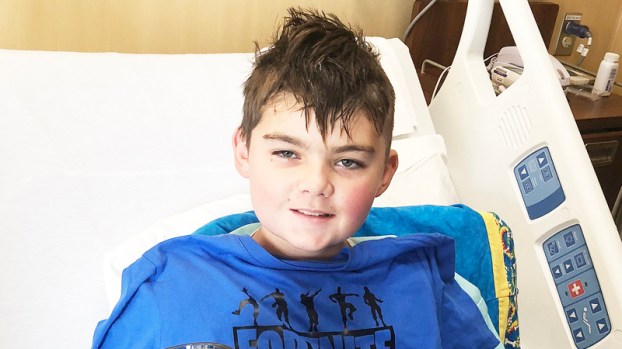 Avery Loper is seen after surgery, necessitated when a CAT scan found the fifth grader to have a benign tumor on the left side of his brain, engrained deep between the ventricles.

Avery’s Riverside Academy classmates stood in support by trading in their Halloween dress down plans to wear his favorite color: blue.

Blue has covered the school in the weeks since, with many purchasing blue wristbands and T-shirts to raise money for Avery’s medical expenses.

Avery was in English class Oct. 26, standing at the Promethean Board when his health took an unexpected turn for the worse.

After correctly completing an exercise, Avery turned to his teacher and said, “I don’t understand.”

Knowing Avery to be an intelligent student with a flair for mischief, teacher Odette Vicknair questioned whether he was serious.

She asked him to complete the next exercise, but Avery told her he couldn’t see.

Students across the Riverside Academy campus recently dressed in blue to show their support for Avery.

“At first, I thought it was something minor because my mom used to get black spots and dots in her vision,” Vicknair said. “I had a student bring him to the nurse. He came back as the class was being dismissed, and when I asked him if he was still seeing spots, he said ‘yes.’ ”

Avery’s mother, Jina Loper, was called to the school, and Vicknair met her in the parking lot.

They returned to the classroom to find Avery spitting on the floor, a glazed look cast over his eyes. He couldn’t recognize the people around him. When the school nurse came in, she suspected it was epilepsy.

Avery was rushed by ambulance to Our Lady of the Lake Hospital in Baton Rouge, where he was initially tested for dehydration.

A doctor suggested a CAT scan, and within 45 minutes, Avery was diagnosed with a benign tumor on the left side of his brain, engrained deep between the ventricles.

“We were told he’d need brain surgery within a week,” Jina said. “It was strange because he’s so healthy. On Oct. 21, he played five baseball games until 11 at night, perfectly normal. If we didn’t catch the tumor, it would’ve eventually just taken over because of where it was located.”

Jina said the support has been incredible, especially from the Riverside Academy teachers, staff and parents who have been texting or calling every day.

“All of his teachers and a lot of the Riverside faculty came to the hospital before and after his surgery,” Jina said.

Vicknair said it’s clear that Avery is loved and supported throughout the school, and everyone is dedicated to helping his family in any way possible.

Avery is back home recovering through speech, physical and occupational therapy.  It will take six months to one year for Avery’s skull to heal, but Jina and Wayne Loper said their son’s progress is astounding.

Avery Loper, pictured after brain surgery, is already eager to jump back into his active lifestyle.

“They’re really impressed with his progress and how he’s speaking, walking and moving around after surgery,” Jina said. “He’s already wanting to get back out there for baseball tryouts.”

Taking it slow will be the greatest challenge for Avery, who has played baseball, basketball, football and soccer since he was 4.

School is expected to be an easier transition, as his teachers have agreed to catch him up when he returns next month.

“He may have to miss a bunch of recesses, and he even said he’s fine with that,” Jina said.

Wristbands to support Avery’s family are available to the community for $3 each.

LaPlace drug dealer sentenced to life in jail; another gets 10 years

NEW ORLEANS — One LaPlace man was sentenced to life in prison while another local resident was given 10 years... read more