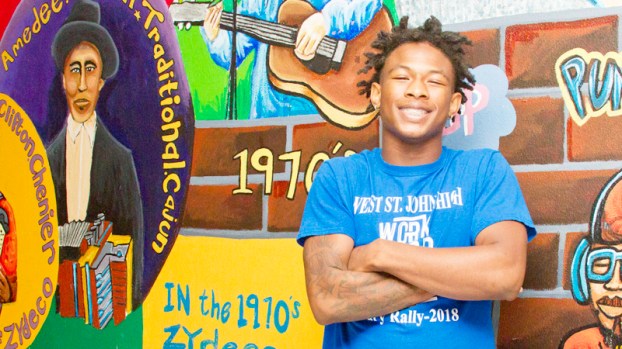 EDGARD — Every morning, when he gets ready for school, West St. John senior Jeremiah Downing draws inspiration from a note tucked into the corner of his mirror.

Jeremiah Downing,
sitting, gives his mother, Cassandra Bailey, a hug during a break in classes.

It’s a teacher’s note from the last day of classes in ninth grade, and it reads: “You have so much power, and you don’t even know it. People gravitate to you. Use that power for good and be the best leader you can be.”

From that point on, Jeremiah’s career aspirations shifted from engineering to dreams of becoming a political leader.

Jeremiah has applied to more than 20 colleges, but his heart is set on majoring in pre-law and minoring in political science at Howard University in Washington D.C.

He’s set for success as a consistent honor roll and principal’s list student, currently ranked second in his graduating class.

“Before, I wasn’t sure what I wanted to do because I felt like I didn’t really have a passion,” Jeremiah said. “I was told, don’t follow your passion; follow your gift. My gift is being persuasive. I want to lead a lot of people because I feel I can help so much.”

In being a leader, Jeremiah said it’s important to guard one’s mind against influences and associate with people who are on the right path.

Jeremiah’s mother, Cassandra Bailey, said her son has always been strong-willed in his good choices, even when exposed to negative influences.

“He chooses not to go that route,” Bailey said. “He’s always wanted to be the best; always wanted to excel. It comes naturally to him. I’ve always tried to show him if you work hard, do what you’re supposed to do and put God first, you will always come out on top.”

Bailey said she would have liked to see her son pursue drama.

Identified as talented in theater, Jeremiah was part of several drama productions, including Willy Wonka and the Chocolate Factory, Grease and A Very Merry Scientology Pageant.

Jeremiah Downing would like to attend Howard University in Washington D.C.

Drama is no longer a draw for Jeremiah, who also participated in talented music for his vocal talent before his voice deepened.

He still participates in music and is currently learning to play the guitar and keyboard.

Last year, he discovered a love for football when he joined the West St. John Rams championship team as a defensive back.

“Football teaches me how to be a better young man,” Jeremiah said.

“I’ve learned that not everything is going to work out just how you want it. You don’t quit over the little things.”

In the spring, he advanced to state competition after being selected by an instructor to represent West St. John in the geometry exam.

Yet, Jeremiah said math doesn’t stand out as his preferred subject.

Jeremiah is the son of Bailey and Wendell Downing Sr. He is close to his aunt, Christina Barnes, of Edgard.