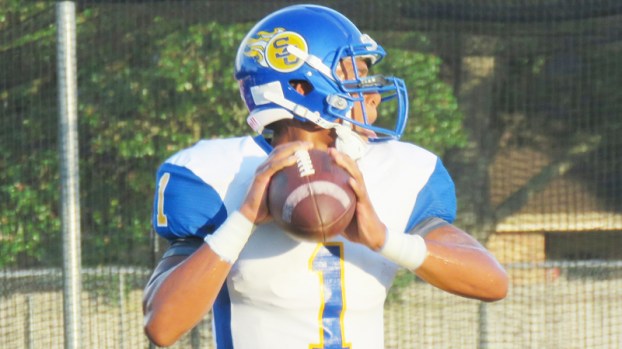 SCC coach Frank Monica said SCC quarterback Justin Dumas, No. 1, brings a lot to the game with his skill set and his best days are in front of him.

LAPLACE — Following a bye in Week 1 of the playoffs, St. Charles Catholic opens up postseason play this Friday in LaPlace by hosting Parkview Baptist.

Parkview (5-6) is packing a dangerous offense capable of slow, methodical marches down the field and plenty of big play threats.

Speed at quarterback and the perimeter skill positions make the Eagles a tough challenge for most opponents.

SCC coach Frank Monica says Parkview’s spread option, based off the triple option, incorporates traditional double wing hallmarks but is far from the only things the Eagles can do.

“They are traditional; they have been to the Superdome,” Monica said. “They have skins on the wall. Their record is deceiving because the first five games they played, every team had one loss. They really are battle tested.

“We have to be assignment sure because when a team runs the triple option, you have to make sure every part of it is dealt with, from the fullback, quarterback and pitch man. You have to have total concentration every snap.”

Senior Sutton Bourgeois lines up at wide receiver early in the season.

Monica said the Eagles do a very good job of using the entire field, stretching defenses vertically and horizontally.

Quarterback Dustin Philippe is a talented runner, as evidenced by his scoring carries of 50 and 23 yards, respectively, in the first round of the playoffs.

Wide receiver Kyle Washington can also be dangerous, having connected on a 70-yard touchdown pass of his own last week to Terry Tolliver via a trick play.

Washington also scored from 44-yards out a week ago via run following a Philippe lateral.

Monica would have preferred playing last week, but noted coaches used their practice time to move players around and create more depth on the field.

The Comets (7-3) are also battle-tested and surely hungry for more following their last bit of game action, which came during an Oct. 27 road victory over St. James High School, 13-7 in overtime.

“I still think he has his best football in front of him,” Monica said. “He is a tall guy with a fine arm, plus he can run the ball. He has got some tools and will get better with time. Experience is always the best teacher.”

The Eagles enter this week’s postseason showdown as winners of five of their last six ballgames, averaging just under 30 points-per-game during that span.

The Comets have won five in a row and are only allowing five points-per-game during those contests.