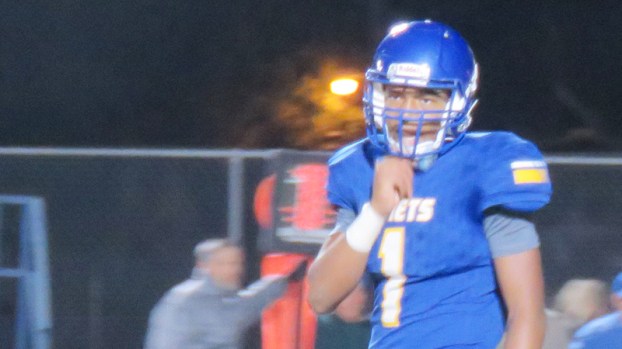 LAPLACE — Not many people are happy to be told they have to work on Thanksgiving Day.

The winner of that game earns a trip to the finals in the Superdome.

Comets coach Frank Monica said there were times when he wondered if this team had what it takes to get to the Thanksgiving break still in pads.

“We had a slow start,” Monica said. “I never believed we’d get by this round because we had to go through the St. James and De La Salles and Donaldsonvilles. Our district helped us prepare, but credit to our coaching staff. They worked their butts off this week preparing us for this game, and in all phases. I’ve never seen such a focus like we had this week.”

The No. 2 seeded Comets used a workman-like offense and their usual stingy defense to hold off No. 7 Parkview Baptist, a team that had lost its first five games and starting quarterback before going on a 6-1 roll to get to Friday’s regionals.

St. Charles held Parkview Baptist to 136 yards of offense and six first downs. The Eagles’ longest play from scrimmage was a 20-yard scamper by quarterback Dustin Philippe in the third quarter. He finished with 47 yards on seven carries. Ian Pourciau scored his team’s lone touchdown on a 1-yard run in the second quarter.

He finished 9 of 14 and added 44 yards rushing. Joseph Chiarella rushed for 47 yards on 13 carries and ran for one touchdown. Trey Lowry scored the Comets’ first touchdown on a 1-yard run in the second quarter.

While the numbers certainly weren’t gaudy, they were sufficient. St. Charles moved the ball effectively in the first quarter, but came up empty following a missed 30-yard field goal attempt with 2:35 remaining.

“I thought our offense did a good job of sustaining some drives,” Monica said. “We didn’t get too much out of the first half. I was a little disappointed in that. We moved the ball too well not to have any points out of it. We knew in the second half we’d have to be a little more resilient because they came back strong last week in the second half against Teurlings. Our defense is pretty good against the run and that helped us. Our quarterback made some mistakes but he threw consistent enough tonight and helped us move the chains. That was the most important thing tonight.”

EDGARD — It was scoreless late in the first quarter at Rudolph G. Dinvaut Stadium when the Rams (8-2) defense needed a play.

Visiting Homer High was near midfield, threatening to strike first.

That’s when Rams defensive lineman Dyran Cook broke through the line and collected a third down sack.

West St. John High took over from there, with Niko Roy barreling down to the five-yardline before Kylan Duhe took the next play into the endzone.

When Jonathan Porter followed with a successful extra point, the Rams were up 7-0 with 11:27 left in the second quarter.

The Rams scored four more touchdowns in the second quarter, entering halftime with a 35-0 lead on their way to a 49-8 victory.

A Tigers score with five minutes remaining in the game was the only thing that prevented a shutout.

Rams will play physical with Homer

EDGARD — After having truly proven themselves as Louisiana Road Warriors this regular season, the West St. John Rams have... read more