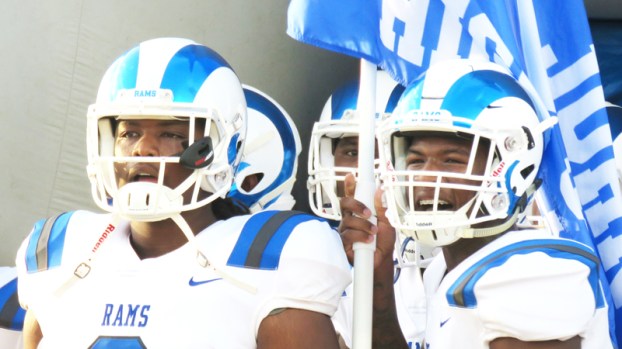 Rams running back Niko Roy, left, and defensive back Jeremiah Downing get ready to charge out of the tunnel before Week 1 of the 2018 regular season. It’s now playoff time for them and the rest of their West St. John teammates, who are hosting Homer High School this week in Round 2 of the Class 1A postseason.

Rams will play physical with Homer

EDGARD — After having truly proven themselves as Louisiana Road Warriors this regular season, the West St. John Rams have no problem welcoming out-of-town guest Homer High to the West Bank this Friday.

With an estimated travel distance of 300 miles, the Pelicans have a long way to go to cover the distance between North Louisiana and Edgard. Thankfully for Homer fans, HHS is bringing a talented football team.

Homer (7-4) started the season with wins in five of its first six ballgames before encountering a three-game losing streak during regular seasons Weeks 7-9. The Pelicans seemed to have put those poor performances behind them thanks to two straight wins by a combined score of 100-6, including a Round 1 44-6 playoff win at home over Elton.

The Pelicans line up in predominantly spread formations, with an ability to pass, but mainly use the run game to move the ball.

The Pelicans are explosive in many aspects of gameplay, utilizing fake punts, regular two-point conversation attempts and aggressive play-calling to keep the pressure on opponents’ defenses.

With a name to match his game, Homer running back Star Williams is a threat out of the backfield, having scored three touchdowns and a 2-point conversion in his team’s Round 1 playoff victory.

West St. John High has only played once since Oct. 20

“We have to be able to tackle him, hit him and get him wrapped up,” Walters said. “If we can corral (Williams and their quarterback runs), it makes their offense a lot easier to handle. We have to come to play and be real violent and physical with them, as we like to do. I think we’ll be fine if we pound on them a little bit and are sure about tackling.

“We have to be assignment sound. In the secondary, we can’t get caught out on fades. Linebackers have to make the proper reads and come down hill.”

The Rams were on the road for each game played between Weeks 3 and 8, but have transitioned nicely into a more routine schedule ever since.

West St. John was off Oct. 26, defeated St. Martin’s Episcopal 55-0 Nov. 2 at home to end the regular season and enjoyed a bye week last week thanks to a 7-2 regular season finish.

Walters said coaches maintained their normal schedule last week with the team focusing on self-scouting to clean up inconsistencies in execution.

The Rams will look to run early and often with all-parish rusher Kylan Duhe, who scored five times that last time West St. John played, and a strong offensive line.

“Games are won and lost in the trenches and we plan to be ready Friday night,” Walters said.

The Rams are seeded 5th in the Class 1A playoffs. A victory this Friday would set up a quarterfinal showdown next week against the winner of 4th seeded Logansport and 13th seeded Gueydan.

EDGARD — Senior outside hitter Amiya Lumar has been a force on the West St. John volleyball team for years, according... read more