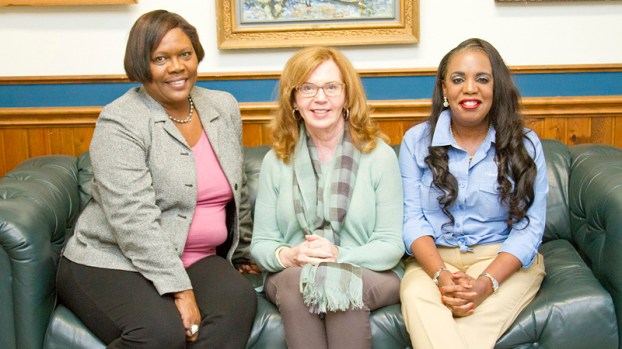 Established by Becnel in 2005, CHARM School teaches young girls alternatives to disruptive or ungovernable behavior through promotion of Character, Health and Heart, Attitude, Respect and Manners.

The three-session program is held in the fall and spring, typically attracting 20 to 25 girls per session. The fall course is wrapping up this week at the Juvenile Services Center in Reserve.

Becnel said CHARM School is designed for girls who have “fallen through the cracks,” including those who commit small crimes, fight at school, run away from home or demonstrate a need for emotional stability through the St. John Families in Need of Services (FINS) program.

“We aren’t there to chastise them,” Becnel said. “We tell them, you know why you’re here, and then we focus on behavior modification.”

Each girl who attends CHARM School receives a pink bag, workbooks, snacks, a ladybug charm, jewelry and a compact mirror.

Pastor Laurie Adams shows off some of the program’s giveaways to local girls who participate.

According to Becnel, the mirror reminds the teenage girls who are often critical of their bodies to look at themselves every day and recognize how beautiful they are.

Burl said girls come in guarded, too tough to show they care, but they listen attentively when addressed by guest speakers from the community.

“We have guest speakers from the community, such as lawyers or sometimes the Andouille Queens come talk to them,” Burl said. “We encourage them to dream and set goals.”

Many girls dream to become nurses or lawyers, Burl said, making it vital they understand having a criminal record as an adult limits career possibilities.

Since its launch in 2005, the program has evolved to address sexting, cyberbullying and other social media concerns.

Pastor Laurie Adams of Voice of Truth Church in LaPlace helped Becnel start CHARM School in 2005, and she uses her public speaking talent to motivate each class.

Starting in 1999, Adams organized a similar Girls With Good Attitudes club for LaPlace Elementary students. Becnel was one of the guest speakers, leading to a long-lasting partnership.

“One thing Judge Becnel said that just completely enamored me was, ‘What is the difference between a woman and a lady?’” Adams said. “Every time, the girls are confused because they have never thought about that. No one has ever talked to them about what it means to be a lady.”

At the end of the three sessions, the girls vote on the most ladylike girl in the class, and the winner receives pearl jewelry.

While the core message remains the same, Burl said CHARM School lessons have shifted in focus to address sexting, cyberbullying and other social media concerns.

“Social media has made peer pressure much worse,” Burl said.

“These girls are so worried about being liked and being seen. They are living in the moment. We try to get them to think about the future and see what they do now can influence that.”

While she’s seen progress in every CHARM School graduate who has returned to say “thank you,” Burl said truancy and behavior are ongoing concerns in local schools that must be addressed through parental involvement and youth enrichment.

SCHOOL BOARD SPOTLIGHT: Runoff candidates turn up heat in District 11

(Editor’s note: This story has been edited since its original publication to clarify statements made by one of the candidates... read more