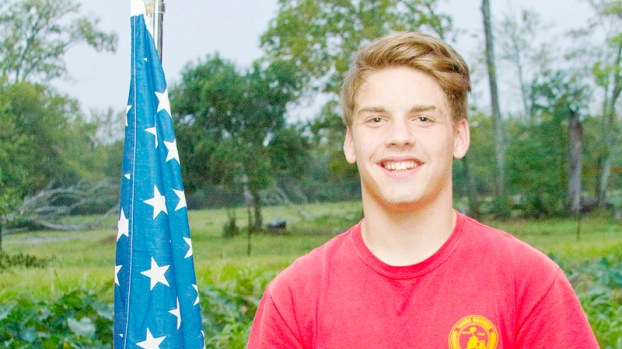 LAPLACE — Growing up in a family full of U.S. Navy veterans inspired Justin Tetlow of LaPlace to pursue an honorable life path.

Tetlow knew by age 6 that he wanted a military career, and his Navy relatives playfully picked on him once he set his sights on the U.S. Marine Corps.

“That made me want it more and really pushed me to become the first Marine in my family,” Tetlow said.

Now a senior at East St. John High School, Tetlow is in the process of enlisting.

“It’s about the honor,” Tetlow said. “I want to have my life mean something and say, I was able to achieve this. The military always seemed the best route to do that. I look up to my family, and I want to teach future generations what I’ve learned.”

Tetlow will have a leg up on other new recruits entering boot camp.

Over the past four years, he’s grown through St. John Parish Young Marines, a group that has sharpened his leadership skills and physical fitness.

Tetlow knows the Marine facing movements and how to teach others. Through Young Marines, he’s studied the history of the Marine Corps, ranks and how to set fires and tents.

St. John Parish Young Marines Unit Commander Brian Bertrand said the most important lessons build character, and that can only be learned through experience.

“Justin is one of our older Young Marines and someone I rely on to keep the younger ones squared away,” Bertrand said.

“One of the perks of being an adult leader is watching these kids grow. Once he started getting these leadership roles, he was held to a higher standard. The maturity came out, and he just blossomed.”

That wasn’t always the case, according to Tetlow.

“When I first started Young Marines, I was having a lot of problems with discipline, and I wasn’t really out of my shell yet,” he said.

Learning to talk to groups of people and realizing younger children looked up to him played a big part in his development.

The big switch came when Tetlow realized the title of Young Marine reflects in his daily actions, not limited to Saturday training twice a month. While he’s participated in numerous events, Tetlow most enjoys the annual Veterans Day parade and celebration, which he will once again take part in Sunday (Nov. 11).

Bertrand said the Young Marines often visit the Veterans Home to spend time with residents, recognizing many don’t have family nearby.

Tetlow also enjoys being around his Young Marines family.

According to Bertrand, Tetlow received the prestigious Lucia Award for his selflessness and compassion for others.

“He won’t just give out orders,” Bertrand said. “He’ll get in there with them and show them what to do.”

Tetlow’s guidance has stretched beyond the Young Marines. When he volunteered as a tutor, he helped a fifth grader turn an ‘F’ into an ‘A’ in math.

Tetlow is the son of Michael Tetlow and Rachel Cashio and the grandson of American Legion LaPlace Post Commander Allan Reynaud.