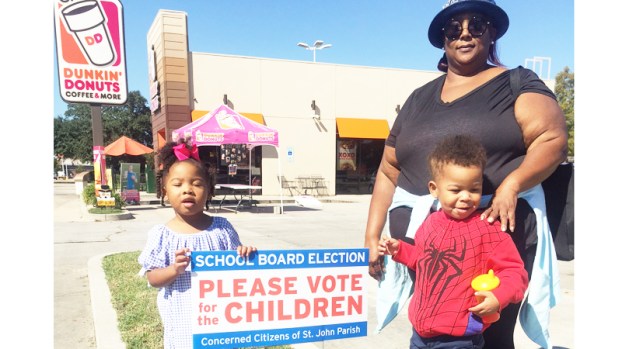 RESERVE — It’s going to take a new attitude and a bit of force to incite change in a St. John Parish School Board that has retained all but one member, according to Robert Taylor, spokesperson for Concerned Citizens of St. John.

Having felt ostracized by St. John Parish elected officials for more than two years in the fight against chloroprene emissions and cancer risk, Concerned Citizens were vocal in the weeks leading up to the Nov. 6 election with a goal to prioritize public safety.

According to Taylor, Concerned Citizens filed a court ordered injunction against the St. John Parish School Board last week to compel members to hold industry to Environmental Protection Agency standards.

Fifth Ward Elementary students face a heightened risk, according to Taylor, who said the school’s proximity to Denka Performance Elastomer exposes children to chloroprene levels up to 400 times the safe amount outlined by the EPA’s 2010 National Air Toxics Assessment, released in 2015.

Concerned Citizens are known for their red “Only 0.2 will do,” shirts, referencing the max amount of micrograms per cubic meter of chloroprene deemed safe for emission.

“It’s not a new School Board, but I hope they are new in their attitudes,” Taylor said. “The School Board has failed our children miserably. That may not be true of all members, but as a whole, they work together.”

In District 11, no candidate collected 50 percent of the vote in a three-way race between incumbent Clarence Triche and challengers Shondrell Perrilloux and Lisa Tregre-Wilder.

There will be a run-off election on Dec. 8.

Taylor said Sanders was the only School Board member to not turn his back on Concerned Citizens while Dr. Chuck Carr Brown from the Louisiana Department of Environmental Equality criticized their mission at a December 2016 meeting.

“We presented scientific facts and evidence, and Mr. Brown called us fear-mongers and troublemakers,” Taylor said. “The only sort of positive response we got was when Patrick Sanders said to give us a chance to respond to what was being said.”

Taylor is hopeful about newcomer Debbie Schum, though she hasn’t explicitly shared her stance on the Denka emissions.

The most recent forum did not focus on air quality concerns because it was regarded as too controversial, according to Taylor.

“We know where our failures were this time,” Taylor said.

“Our group was influenced, and we did not live up to our mission statement.”

Parish Council support is vital, Taylor said, emphasizing each Council member with the exception of Larry Sorapuru has turned a blind eye to air quality concerns.

Sorapuru said he has worked with Concerned Citizens for two years to get Denka to lower emissions.

“We need to educate people to understand we need a clean environment to live in,” Sorapuru said.

“Public safety of this whole Parish is at stake. All we’re asking for is that industry complies with the EPA standards.”

Sorapuru said U.S. District Judge Martin Feldman “came to his senses” Monday when he denied a motion by Denka to dismiss a lawsuit filed by 13 Concerned Citizens.

Feldman previously ruled in July the lawsuit was defective because it did not, at the time, include specific examples of health problems encountered by members of the community.

“It definitely gave us hope to keep going,” Taylor said. “We’ve fought with the local government for two years, and we’re astounded at the lack of progress we’ve made in protecting those 500 kids at Fifth Ward.”

Denka installed new equipment in 2017 and maintains they have cut down chloroprene emissions by 85 percent, a claim challenged by Concerned Citizens.

LAPLACE — Growing up in a family full of U.S. Navy veterans inspired Justin Tetlow of LaPlace to pursue an... read more