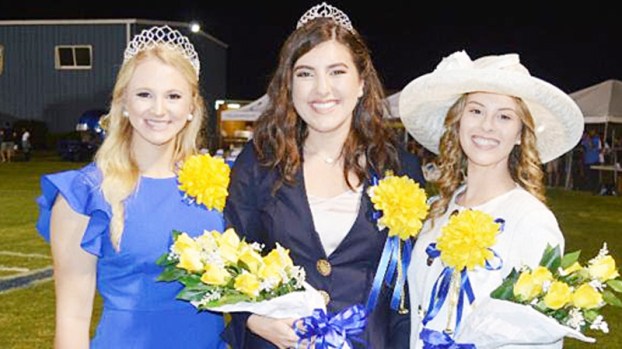 Before the game, the celebration included an alumni cook-off, a motorcade featuring the homecoming court wearing suits and riding in shiny convertibles, and the crowning of the homecoming queen took place at halftime. The SCC Homecoming Court members were chosen by a vote of the student body.

Senior Bailey Bourgeois, daughter of Curt and Tiffanie Bourgeois, was crowned queen at halftime. She has been a three-year member of the Art Club and the swim team. Bailey is also in Student Council, and on the Pep Rally Committee, tennis team, and track team.

“Being crowned homecoming queen is an amazing honor,” Bailey said. “I can’t express my gratitude enough for my family and friends constantly supporting me. Thank you to my peers and the student body for giving me this great opportunity to represent the school. SCC has truly become my 2nd family. Go Comets!”

Senior Keri Clement, daughter of Jane and Darren Clement, was named as the Maid of Honor. She has been a member of the Stagehands for the past four years and is also a member of Student Council, French Club, Ambassadors, Retreat Team and Pep Rally Committee and is a Eucharistic Minister and also Captain of the Starsteppers.

The football team had a big win over Lusher for Homecoming 2018.

The cook-off winners were the Murphys (and Whoever Shows Up) sponsored by Mike and Giselle Murphy.

The 10th annual SCC Alumni Cook-off has grown over the years and is always one of the most popular activities of Homecoming.

Proceeds from the cook-off go to the SCC Alumni Association.

This year’s cook-off winners were the Murphys (and Whoever Shows Up) sponsored by Mike and Giselle Murphy. The winning dish was fried crawfish etoufee balls with remoulade sauce.

A special thank you to other chefs and their sponsors:

• Sue Louque of Paulina. She is married to Danny and is he mother/mother-in-law of Ty & Dennille Monica and granny to Riley (Class of 2021). Sue loves coming to support SCC any chance she gets and wears her blue & gold proudly.

• St. John the Baptist Parish President Natalie Robottom. She has been a supporter of SCC since her two children became Comets. She was recently selected as American City & County Elected Official of the Year.

• Richard Klibert is a long time supporter of St. Charles Catholic with three children who graduated as Comets in the classes of 1992, 1996 and 1998. Klibert was the CEO & President of Diversified Well Logging for 26 years, retiring just over a year ago.

• Cory Gaudet is an equipment manager for the New Orleans Saints Organization. He contributes to SCC whenever we need anything and heavily contributes to the annual SCC Ray Laiche Memorial Golf Tournament.

• Za Maurin is District 5 Justice of the Peace. He is the leader of Keep St. John Beautiful and retired Captain from the St. John Parish Sheriff’s Office.

LAPLACE — A local man is facing dozens of counts related to the illegal filming of a child, authorities said.... read more