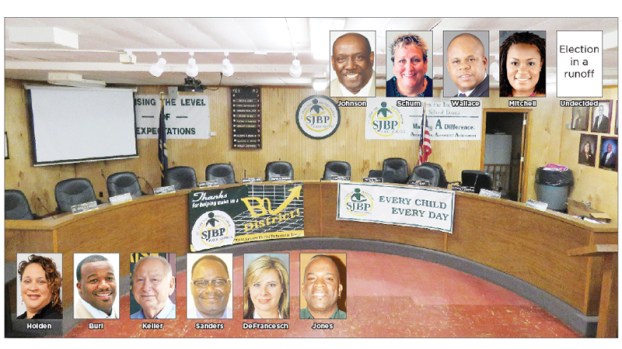 The new St. John the Baptist Parish School Board starts its four-year term in 2019.

LAPLACE — The new (mostly re-elected) St. John the Baptist Parish School Board begins its next 4-year term in 2019.

Although voters largely voted back in the names they knew this week, the 2019 board will be vastly different from the previous one that took over in 2015.

There is also one spot still undecided on the 11-member board, as District 11’s Clarence Triche is facing a December runoff election with challenger Lisa Tregre-Wilder.

Numerous challenges await the Board, not the least of which includes mounting funding concerns due to decreasing sales tax and property tax revenue that will make budget decisions difficult to handle in upcoming years.

In an effort to inform community members of their elected leaders’ initial goals and state-of-education thoughts, L’OBSERVATEUR reached out to the 10 known Board members this week by phone and email, asking for their opinions on a No. 1 action item for 2019 and what role the School Board should play in District leadership.

School Board members Charo Holden, Sherry DeFrancesch and Phillip Johnson did not respond as of press time Friday morning.

District 2’s Ali Burl wants the focus on at-risk students ratcheted up to ensure all students have access to a quality education.

District 3’s Gerald Keller said the number of certified teachers must increase if Board members hope to move the school system forward.

“These are people who have been taught the techniques you need to utilize in the classroom, people who have curriculum and instruction experience,” Keller said, adding a lot of recruiting is needed.

District 4’s Patrick Sanders plans to follow through on a platform promise to create a parental-involvement program, starting off with a winter symposium.

He hopes to create more grade level-specific assistance to help parents understand a better way of helping their children in core subjects so they can be of great value at home.

“I’m going to make sure the Administration and the District assist me in following through,” he said.

“It is an issue all over the District, and I’m going to start with my District,” Jones said.

“We’re talking about some plans right now. Emily C. Watkins has programs like Muffins with Moms, Donuts with Dad and it’s been going on a while. I’m going to work furiously in my District to get my parents more involved with parental participation.”

“I want to make sure we are able to build a strategic plan so that we can focus on one or two topics at a time that we need to do to build a better school system,” Schum said.

“We should have one in place by the end of the school year, which would be May of 2019. We shouldn’t spend so much time planning that there is no time to implement.”

She said school scores shouldn’t be everything community members focus on when evaluating the performance of a school system and superintendent.

“I think we need to look at other issues like safety and security on school campuses,” Schum said. “We need to make sure we are hiring qualified and certified teachers.”

“When the new board comes aboard and everyone gets sworn-in in January, it will be something that we need to talk about at our next January retreat,” he said.

“I’m excited. I’m a team player. It’s about making our District grow. We have 6,000 kids we have to educate so whoever is in place, we all, as a Board, have to work together.”

“I would like to see more technology in the hands of students,” she said. “State assessments are now computer based and our weekly classroom assessments should mirror them as much as possible. We will have some extra funds in the near future and I will push to purchase more computers for more one-to-one technology in grades 6 to 12.”

According to Mitchell, the District is making “major strides” in getting students closer to their Mastery goals.

“After experiencing some declines, there were some major shifts in instructional practices and intentional focus placed on mandatory Tier 1 curriculum implementation in every classroom everyday, along with Tier 2 and Tier 3 intervention for students not mastering the Tier 1 skills presented in their classrooms,” she said.