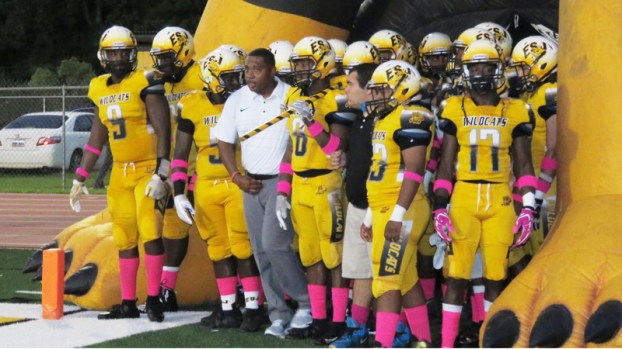 The Wildcats begin their playoff run at 7 p.m. Friday at the East Ascension Spartans.

The East Ascension Spartans (9-1) enter the playoffs as winners of two in row, including last week’s rivalry showdown victory over St. Amant.

Quarterback Jason Wakefield is an experienced and dangerous signal caller, while the Spartans also boast a talented kicker in Alberto Ontiveros, who is capable of connecting on field goals from beyond 40 yards.

Jaqunn Mitchell is another special teams ace, capable of scoring on any kick or punt that isn’t touched back or fair caught. Mitchell’s 59-yard punt return TD last week against St. Amant proved to be the difference in a seven-point victory.

If the last three weeks are any indication, ESJH (5-5) will be ready for the challenge.

Following a disappointing 33-12 loss to Terrebonne Oct. 12, the Wildcats have reeled off victories over Hahnville, Thibodaux and South Lafourche by a combined 119-28 margin.

The burst of strong play came at the perfect time for coach Brandon Brown, who is in year one on the Wildcats sideline.

“We didn’t finish games early in the season; you have to go out and do that,” Brown said. “I am very proud of our guys. They showed a lot of resilience. Early on, we had a bad start but we finished strong. Ever since the week of Hahnville, we’ve understood the situation we put ourselves into. Every game is a one-game season. We knew if we wanted any chance at the playoffs, we had to win out. Our kids are motivated.”

Brown acknowledges the 2018 season has been all about building success out of a stalled program, which was in the same place last year — entering the playoffs at 5-5.

“In order to take that next step, we need to win in the first round of the playoffs and move on,” Brown said. “Our guys understand this is a new season. We feel like we are better than a 5-5 team. The good Lord blessed us with another opportunity. We’re thankful, we’re grateful and now we’re just ready to go and play.”

The Wildcats are led on offense by quarterback Sean Shelby, who has passed for 1,718 yards in 2018 following a midseason promotion.

Dontae Fleming and August Markel lead the team in receiving, while Pershing Toney leads a three-back attack in rushing yards and total touchdowns.