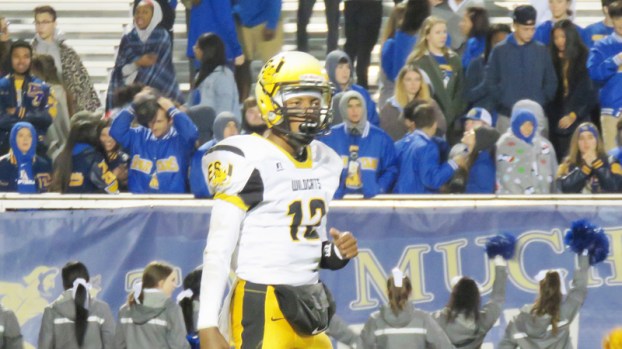 GONZALES — The field was muddy, the Wildcats sideline was downright disgusting and the temperature was cold, but none of it stopped an energized East St. John High from putting up a superb effort.

Unfortunately for ESJH fans, the team’s best wasn’t enough as the Wildcats fell 17-13 on the road Friday night to the East Ascension High Spartans (10-1) in the first round of the Class 5A playoffs.

“I am extremely proud of my kids in the way they fought; the way they worked,” Wildcats coach Brandon Brown said. “Things weren’t perfect for us, from the field conditions to the opponent. That is very good opponent. Our kids fought the entire game. All the way until the last second, we had our chances and just didn’t capitalize.”

Wildcats players, left, line up to defend a field goal attempt in the second quarter of Friday’s game.

The loss snapped a three-game East St. John High winning streak and put a sour end on what had been an encouraging fall of football.

“Now we just have to move forward and continue to get better as a program,” Brown said. “We’re just starting. I want my seniors to focus on that classroom, graduate and do everything to set themselves up for a good life. I’m proud of them.”

The defeat was the Wildcats’ sixth of 2018, compared to only five wins but wasn’t completely representative of a squad heading in the right direction.

ESJH fell behind 7-0 early after giving up a first-drive touchdown but rallied for two defensive scores in the second quarter to take a 13-7 lead into halftime.

However, the cold weather and strong Spartans defense held the Wildcats in check over the final two quarters and put just enough offense on the board to escape into the second round of the playoffs.

Brown said the Spartans are extremely big on the offensive and defensive fronts.

“When they got the ball on offense, they kind of laid on us and were able to have some success running the football,” Brown said. “Their defensive line caused havoc all night, getting into the backfield, putting pressure on our quarterback and stopping the run game. It’s a good group.”

ESJH coach Brandon Brown talks to his players during a break in game action.

RESERVE — Riverside Academy rebounded from an 0-4 start to finish with three victories in its final five games, setting... read more