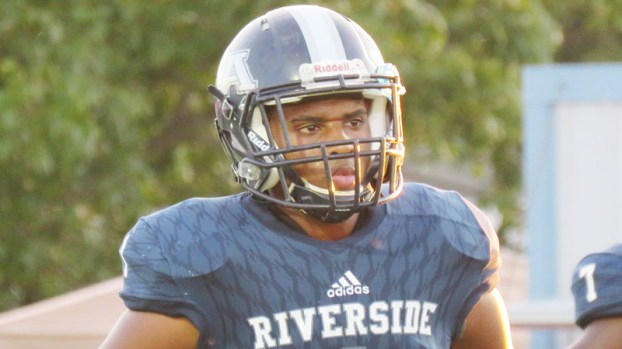 Senior wide receiver Kash Foley and the rest of the Riverside Academy offense is looking to peak in the playoffs this month.

RESERVE — Riverside Academy rebounded from an 0-4 start to finish with three victories in its final five games, setting the stage for a road, round one Division III playoff game at No. 7-seed Ascension Episcopal, which starts at 7 p.m. Friday in Youngsville.

The Blue Gators (9-1) enter the game winners of four of their last five games, including a 40-8 throttling of West St. Mary last week.

Cole Simon, one of the top passers in Acadiana, leads the Ascension Episcopal offense, which scored 40 or more points six times this season.

“They are really good on offense,” Rebels coach Kevin Dizer said. “They can throw the ball and run. They have a really athletic quarterback that can beat you with his arm and feet.”

Dizer said RA coaches are preaching a real simple message to Rebels defenders this week: Do your job.

“I don’t need you to fly around and make every tackle,” the first-year head coach said. “I need you to do your job, be in your spot. If we get 11 guys doing their job, then we will set ourselves up for success.”

The Blue Gators replaced 10 starters on defense entering this year and took some time to form a cohesive unit. They have held opponents to 14 points or less in four of their last five games.

Riverside, playing its best football of the season, seems ready for the challenge.

“Our offense is yet to play our best game,” Dizer said. “I still think the ceiling is really high for our offense. We’ve done a lot of good lately, but our best game is in front of us, offensively.”

RA has scored 47, 42 and 56 points in its three wins this season. Those victories were a relief following a difficult four games to start the season, which included losses to Southern Lab, Barbe, Rummel and De La Salle.

“Those first four games, a lot of people were saying it makes you better because you’re playing good opponents,” Dizer said. “Some of those teams were so much better that we didn’t have a chance to get better. The last month or so, no matter if we won or lost, we’ve been in football games. We’ve been able to get better, learn how to win and deal with clutch situations.”

When it comes to playoff football, special teams are a huge deal, Dizer said, adding those who take it for granted find out it’s the aspect of the game that gets them beat.

Riverside is known for spending needed time on special teams evaluation and coaching.

“We’re turning over every rock on the other team to make sure there is not anything we are missing,” Dizer said this week. “I always want to see if there is something we can take advantage of with the other team. We have a really good kicker in Colby Wilson, and we just have to make sure we are on our Ps and Qs.”