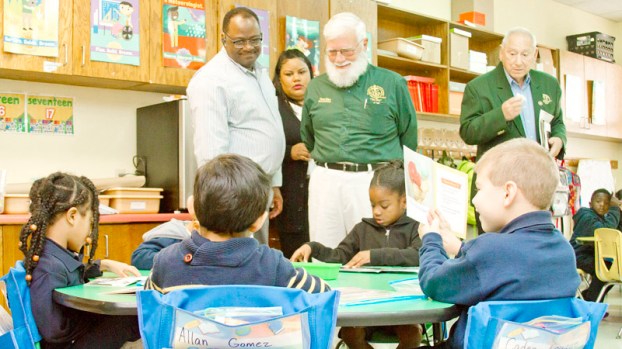 RESERVE — Fifth Ward Elementary School has seen a disastrous 26-point drop in school performance over the past five years, leading to a ‘D’ rating anticipated to drop further when 2017-18 scores are released at the end of the week.

Vaughn views Fifth Ward as the “soon-to-be Top Gains School of the District.”

“We are trying to be more transparent and let the School Board members see what’s going on as it relates to the first nine weeks being over,” Vaughn said.

“We’ve seen equity in education with an individualized approach. Students are becoming more successful on exit tickets at the end of each lesson. We review individualized growth plans, and we are seeing the crawl forward of students mastering objectives.”

According to Vaughn, data from the previous school year indicated only 37 percent of kindergarten-through-second grade students were prepared to advance to the next grade level in terms of reading proficiency.

Additionally, 72 percent of first graders were ruled “at risk” of not meeting grade level standards in math.

To address deficits, Vaughn and her team implemented 45-minute intervention blocks at the start of each school day.

School Board members observed English and math intervention blocks, and one group was surprised to learn a kindergarten class engaged in quiet reading was comprised of special education students.

Vaughn said 22 percent of children in the class have progressed to an end-of-kindergarten reading level, and one child is reading at a mid-first grade level.

He hopes there will be opportunities for parents to take similar tours.

“For most of the years since I’ve been a School Board member, Fifth Ward has been a school in decline,” Sanders said.

“What I see here is a very cohesive staff in all components from administration to the classroom teacher and support staff. I think we have tapped into the necessary human resources and have a staff in place ready to take the challenge and move the children forward.”

George is optimistic about the future success of the school given positive feedback and what he saw on the tour.

In another room, George watched a master teacher speak to teachers about analyzing and annotating daily exit tickets to shape the next lesson’s objectives.

“As you walk through these hallways and see these teachers working, do you feel this school has the rating that it has?” George said.

“I’ve been here six years now, and this is the best I’ve ever felt about Fifth Ward Elementary. People send me comments that are on Facebook about Dr. Vaughn, her staff and the overall feeling of the school. They’re creating a culture where people want to be.”

From back, School Board members Gerald Keller and Ali Burl III listen in as teachers Kyroneka Batiste and Jessica Green go over lesson plans with a master teacher.

Vaughn said Fifth Ward Elementary has a newly instated Parent Teacher Organization, which has been absent for more than a decade.

Teacher support cohorts are a big focus this year to guard against staff turnover, according to Vaughn.

She said there’s also a focus benchmarks from kindergarten through second grade to ensure children are not years behind grade level when they reach third and fourth grade LEAP testing.

A “Re-Open House” will be held in January for parents to review school data and progress.

Fifth Ward Elementary is located on Panther Drive near River Road in Reserve, serving students between prekindergarten-4 and fourth grade with an enrollment of 458.

Up to 4 decades in jail await man for Thanksgiving homicide