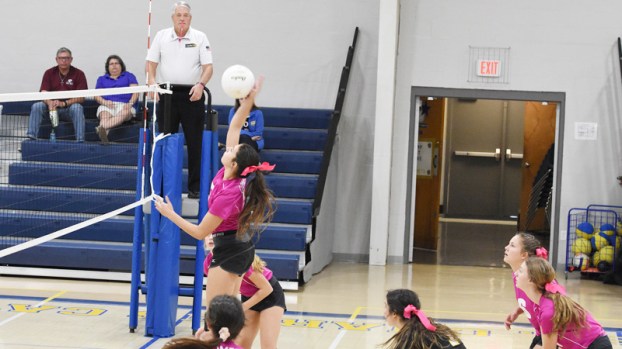 SCC's Valerie Perriloux goes up for a kill.

LAPLACE — Coach Meghan Ericksen directed the St. Charles Catholic Lady Comets on the volleyball court for the last time Friday, when the team took a hard-fought 1-3 loss against Pope John Paul II in the regional round of the LHSAA playoffs.

Ericksen is moving back to Illinois before next season, and she said she prays St. Charles Catholic finds a coach who will dedicate time to next year’s rising seniors, because “they are a great group of girls with a lot of talent.”

The girls missed the season goal of breaking .500, instead going 16-19 in the regular season, but Ericksen said they showed strength in attitude.

Entering the playoffs, the No. 13 seed Lady Comets were up against No. 20 seed Patrick Taylor Science & Technology Academy.

Valerie Perriloux and Antoinette Chiarella go up for a block. Photo submitted by SCC media class.

“First round, we played terrible,” Ericksen said. “We were lucky to win. I’m glad they pulled together as a team to finish the job.”

Facing No. 4 seed Pope John Paul II in the regional round presented a more daunting task, but Ericksen said the girls fought harder than they had in the previous game.

“We went into the game knowing how they’ve done in the past, and I think that hurt us,” Ericksen said. “We played very well, though. If we hadn’t gone into the game thinking like we did, I believe we could’ve won.”

RESERVE — Pick a play; pick a player. It all worked for the Riverside Academy Rebels Friday night at home... read more