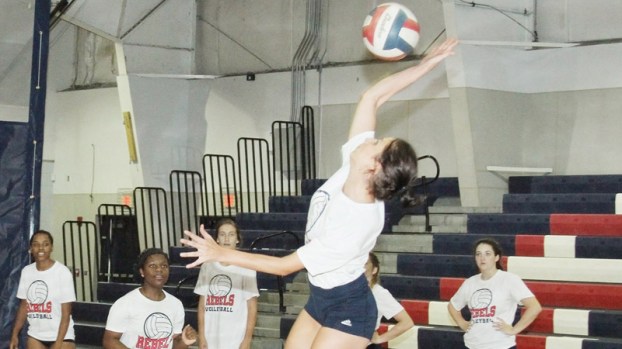 Riverside Academy senior Allie Jacob makes contact with the ball during practice last month. The Lady Rebels fell to Hannan in the second round of playoffs.

RESERVE — This season was anticipated to be a rebuild year for the Riverside Academy volleyball team, and head coach Brandi Melancon said a 7-28 losing record for the regular season left little hope for a sweet spot in the LHSAA Division IV playoff bracket.

However, an end-of-the-season final push propelled the Lady Rebels to No. 16 seed and secured a Halloween night bi-district playoff game against No. 17 seed Loyola Prep.

That first round ended in an exciting 3-0 win for Riverside, but the season came to a close Friday night with a 0-3 loss against No. 1 Archbishop Hannan.

Melancon is proud of the Lady Rebels’ performance in both rounds, starting with how they turned their luck around in the first round to come out with impressive 25-4, 25-16 and 25-17 wins over Loyola Prep.

“We didn’t really know what to expect in the first round, so we prepared business as usual,” Melancon said. “Our girls came out on fire. With the way our season went, we were not expecting to get a home playoff game, but we were able to make it happen. We were very excited to get a home playoff win.”

The regional round against No. 1 seed Hannan presented a far greater challenge.

The Lady Rebels were looking for redemption from an Oct. 25 game against Hannan, which ended 25-1, 25-6 and 25-6 in one of the Lady Rebels’ worst performances of the season.

“We came out knowing it could be the last game of the season, and I’m so proud of how hard they fought against a very tough opponent,” Melancon said. “We knew what to expect and how to defend a little better.”

She said St. Pierre finished strong in the playoffs after battling sickness throughout the year.

RESERVE — Pick a play; pick a player. It all worked for the Riverside Academy Rebels Friday night at home... read more