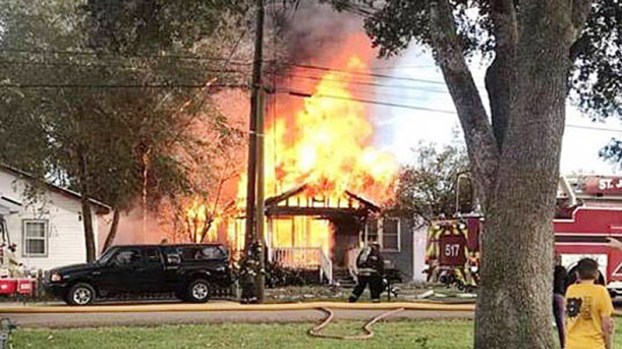 Amy Duhe lost the home she shares with her children at 463 Mahogany St. in LaPlace after a fire ripped through the structure on Oct. 26.

LAPLACE — Amy Duhe has felt trapped in a nightmare since watching fire destroy the LaPlace home that had been in her family for more than 70 years.

Amy was visiting her cousin in Reserve the evening of Oct. 26 when she received an alarming call from her mother, who resides next door to her 463 Mahogany St. home.

There was no hope of salvaging the structure by the time Amy arrived, less than 10 minutes later, to find her house fully engulfed in flames.

“I’m still waiting to wake up,” Amy said. “We are starting from scratch. I don’t know how to do this.”

Amy, a single mother on disability, said her 19-year-old son and 16-year-old daughter were not in the house at the time of the fire.

The fire destroyed the house at 463 Mahogany St. in LaPlace.

Aaron Mollere, Amy’s cousin, said the fire likely started as an AC or electrical fire from a breaker panel riddled with old wiring.

Aaron commends the St. John Parish Office of Fire Services for their prompt response, traveling from Reserve as other units responded to a LaPlace accident.

“They made a long trip in a very short amount of time,” Aaron said.

Three units responded to the fire, which was strong enough to melt the siding of the neighboring house.

According to Aaron, the neighbor was out of town at the time of the fire and was informed of the damage by family members.

Within the bleak situation, there were two saving graces:

First, no one was hurt.

Amy’s 19-year-old son was the first to notice the fire when he walked home from a relative’s house. His uncle and grandmother were close by to assist in calling 911.

The second saving grace has been the support.

“This family has been here their whole lives, and to see their hometown come to their rescue means everything to them,” Tara said. “They really want to thank the firefighters, EMT, police officers and those who have donated already for their thoughts and their encouragement.”

According to Aaron, East St. John High School set aside a fund to assist students impacted by disaster. A kindhearted business owner purchased school supplies for Amy’s daughter from Office Depot, and the School Board is set to approve funding to give her new uniforms.

Meanwhile, Greater New Plymouth Rock Baptist Church of Reserve graciously donated food to the family Wednesday morning. Every bit of support helps, but it is still a long road to recovery for Amy and her children, who were previously struck by tragedy when their father passed away three years ago.

The family had only been back in the house for a month and a half prior to the fire after moving out for water line replacement, according to Aaron.

“The goal was to replace parts and get insurance on the house in the next month,” Aaron said. “That had not happened at the time of the fire.”

Aaron said the family’s biggest need is financial. With the necessary funds, they hope to demolish the remaining pieces of the structure.

Amy can then put a down payment on a mobile home or start to rebuild.

LAPLACE — A 15-year-old was killed Saturday evening in LaPlace, police said, the result of an apartment resident shooting him... read more