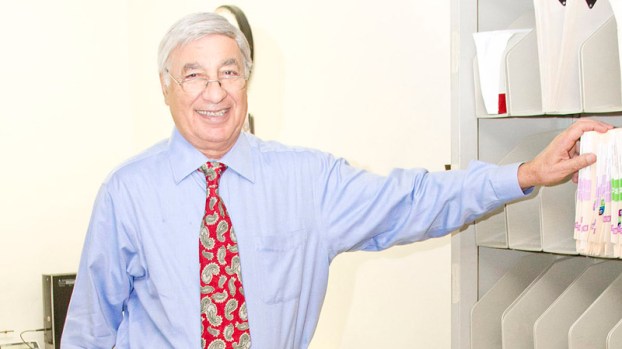 Dr. Bijan Motaghedi said he was attracted to LaPlace and the field of otolaryngology because of Southern hospitality and the ability to operate his own independent practice.

LAPLACE — Dr. Bijan Motaghedi remembers what Rue de Sante in LaPlace looked like before it was an established medical community.

Trailers lined the sides of the roads until the first suite building was constructed at 501 Rue de Sante in 1982.

Suite 11 in that building housed Motaghedi’s Otolaryngology (Ear, Nose & Throat) practice for 36 years until his retirement in September, marking the end of a medical career spanning five decades.

Before venturing to LaPlace, Motaghedi graduated in 1967 from Tehran University of Medical Sciences, the most distinguished educational establishment in his home country of Iran.

Motaghedi’s mother taught him from a young age that medicine is one of the best professions to go into. He chose to go into ENT in particular for the freedom of owning his own practice.

“I felt this is a field you can be at least partially independent in,” Motaghedi said.

“A fair percentage of patients could come to you directly without a referral. I did not want to be employed, even though I could’ve made more money that way.”

Dr. Bijan Motaghedi was the first to perform surgery in the old River Parishes Hospital. His ENT practice was located just down the road, until he announced his retirement this fall.

Though he craved independence in his work, Motaghedi enjoyed collaborating and consulting with other physicians as an avenue to continuous medical education.

A large group of people worked hard to build the LaPlace medical community, despite high turnover rate of management within the old River Parishes Hospital, according to Motaghedi.

No matter the challenge, Motaghedi said there was always a bond of close communication. He feels that bond has become muddled over the years with the introduction of new insurance practices.

“Everything is disconnected and slowly disappearing,” Motaghedi said. “There is all this intervention from the government that has changed the atmosphere in medicine. In a sense, you don’t have any more family doctors. If a patient ends up in the hospital, there is no follow-up because they are seeing a different hospitalist every time.”

Motaghedi said relationships between old time physicians and their patients was “a sacred type of thing,” joking that in a family, God came first and the family doctor came second.

It was a mindset Motaghedi aimed to keep with his patients when he moved to the United States and then, briefly to Montreal, Canada, to complete surgical training. Southern hospitality and spirituality drew Motaghedi’s family to Louisiana.

“There’s a special feeling in the South that I didn’t feel anywhere else, so that’s where I decided to stay,” Motaghedi said.

Dr. Bijan Motaghedi, seen inspecting the ear of a former patient, has 50-plus years of experience and has practiced in LaPlace since the early 1980s.

Over decades of providing services, there are some memories Motaghedi will never forget.

Motaghedi was the first to perform an operation in the River Parishes Hospital surgery room. The patient, who had a fractured nose, needed reassurance the anesthesia machine would work since it was being used for the first time.

On another occasion, a fierce hurricane blew the roof off other suites in his building, while his space remained intact.

As a physician assistant, Ramirez would enjoy the independence of being able to write prescriptions and diagnose patients, even when the physician is not around.

“He is an excellent doctor, and I’ve learned a lot from him,” Ramirez said. “He’s very patient and works well with his patient population. People will miss him, but they are happy for him because they know he deserves a good retirement.”

Now that he is retired, Motaghedi plans to travel and visit his grandchildren.

LOOKS BRIGHT: At age 6, Payton Bergeron already has a voice to remember