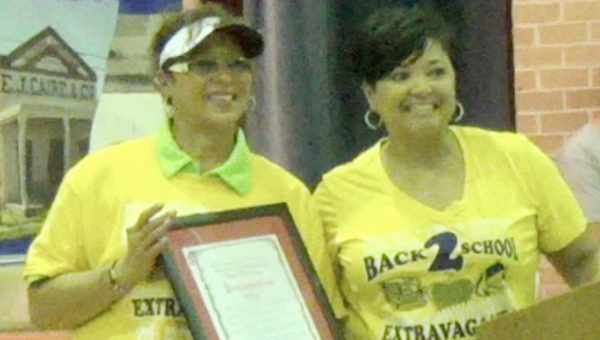 LAPLACE — St. John the Baptist Parish President Natalie Robottom improperly called together a gathering of Parish Council members Aug. 23 in the parish president’s conference room to discuss why the parish needed to engage the legal services of a construction lawyer, according to District Attorney Bridget A. Dinvaut.

The allegation was made in the form of a lawsuit filed last month by Dinvaut, naming as defendants: Robottom and Council members Larry Sorapuru, Thomas Malik, Lennix Madere Jr., Larry Snyder and Julia Remondet.

Robottom did not return a L’OBSERVATEUR call seeking comment but released an emailed statement via Communications Director Baileigh Rebowe Helm saying it is not her practice to comment on pending litigation against her or the Parish President’s office.

At the center of concern for Dinvaut, according to documents filed with the Clerk of Court’s office, is an assertion that Robottom organized a meeting of Parish Council members “behind closed doors, hidden from public participation and scrutiny” to discuss costs and possible Council action to rescind an ordinance mandating increased legal representation by a construction attorney in all Parish business that demands such.

Dinvaut stressed her office is not at odds with the administration or Parish Council but is obligated to defend the state’s open meetings standard.

L’OBSERVATEUR reached out by phone and email to Sorapuru, Malik, Madere, Snyder and Remondet.

Madere told a reporter he did not need to tell anybody about lawsuits or anything like that.

“I’m not going to make any comment about that in the paper,” he said.

Sorapuru said he wanted to speak with an attorney before commenting at length but said he did not feel the open meetings law was violated.

In an email, Snyder said he serves District 6 “with transparency and vigor” but would have no comment on the issue raised by the District Attorney’s office.

Council members Malik and Remondet did not return requests for comment.

The issue seems to have taken shape during the Aug. 14 Parish Council Finance Committee meeting, when Sorapuru sought to amend the agenda to discuss an ordinance passed in 2017 requiring the parish to engage the legal services of a construction attorney for all construction projects.

Robottom said she wanted to have a meeting with the District Attorney’s office to address Administration concerns with some of the contract language and obligations.

Sorapuru withdrew his motion, according to the lawsuit, with an understanding that the contract question would be brought up at the next meeting.

On Aug. 23, a quorum of Council members — Sorapuru, Malik, Madere, Snyder and Remondet — as well as Robottom met. Assistant District Attorney Keith Green Jr. and law clerk Kennilyn Schmill participated by phone without being told who was in attendance.

The lawsuit alleges Robottom questioned the need for the legal construction contract, saying the Parish has done $700 million in construction projects and has never been sued or needed a contract with the construction attorney requirement.

Schmill sent an email synopsis of the meeting the next day to all members of the Parish Council, to which Remondet responded by asking who decided the contract should be presented at the next meeting.

Parish Councilwoman Jaclyn Hotard, who was not in attendance at the Aug. 23 meeting, responded, “there were 5 council members present at this meeting to discuss the ordinance, including yourself. Maybe someone in the meeting had that information.”

There are nine elected St. John Parish Council members and when five or more gather for official business, it constitutes a quorum, meaning an official meeting is taking place.

Under state law, those meetings must follow certain guidelines, including prior advertising to the public via notice and agenda setting.

“It’s not hard; nothing is a secret,” Dinvaut said.

During interviews with meeting participants, the District Attorney’s office says Sorapuru, Snyder and Malik each admitted knowing the meetings were taking place illegally with a quorum of Council members present but continued all the same.

According to the lawsuit, Madere, who serves as Parish Council chairman, called Green Aug. 28 to discuss an agenda item, admitting to the Louisiana Open Meetings Law violation in the process.

“When we got there, it was just the four of us,” Madere said, according to the lawsuit. “But you see … Larry (Sorapuru) came in late. We was already talking in the meeting, so we didn’t even notice it was five of us in there.”

A civil judgment of $20 per defendant is also requested.

Under Louisiana law, Dinvaut said it is each district attorney’s responsibility to enforce the open meetings law within his or her jurisdiction.

Hotard, who was not named as a defendant in the lawsuit, said she does not believe Council members are actively engaging in meetings outside of the public’s view.

“What also adds to the complexity of the issue is an instance like the current situation, where individuals are not aware that a quorum of the governing authority will be present: They are only aware of their individual invite to a meeting,” Hotard said. “Then the issue becomes deciding who needs to leave the meeting once there is a quorum of the governing authority present.”

Although no action was taken at the unscheduled Aug. 23 meeting of Robottom and five Parish Council members, participants clearly stated the focus was construction attorney fees and the ordinance mandating them.

Dinvaut has long championed this measure as a safeguard against unnecessary taxpayer spending when it comes to parish-led construction projects.