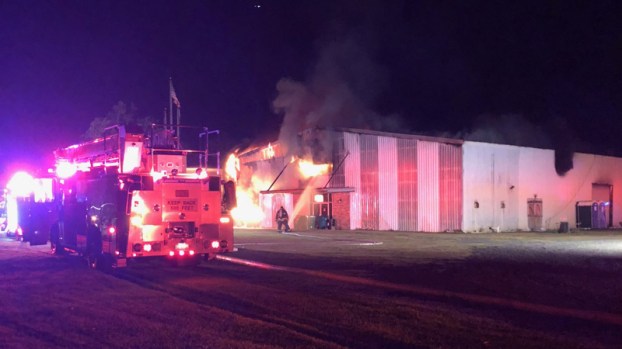 LAPLACE — What was meant to be the largest fundraiser of the year for active cancer patients in the River Parishes came to a tragic end Halloween night when a massive fire overtook the Garyville Recreation Center Gym on GYO Road.

The gym was leased by nonprofit group Perry’s Posse and stocked with thousands of donated garage sale items projected to raise $25,000 for local cancer patients this weekend.

Perry’s Posse representative Trudy Torres said losing the gym is heartbreaking because it provided year-round storage for the group’s most successful fundraiser.

“It’s not just about what we’re going to do now, but what are we going to do in the future?” Torres said. “Right now, we’re kind of in shock.”

Perry’s Posse public relations director Joan LeBouef said the community is the only place to turn to as the group works to replenish funds from the fire and secure a new storage location for future garage sales.

“Quitting is not an option,” LeBouef said. “The community will be there for us because we have always been there for them. I know someone is going to step up because we have the best community. That’s what makes us the River Parishes.”

Dufrene said the number of items inside the gym and the questionable stability of the structure contributed to a heavy fire load that needed to be extinguished from the outside.

“We made the call not to do interior because the fire was starting to fatigue that steel, and I didn’t want to take the chance of that building collapsing on any of our guys,” Dufrene said.

After approximately two hours extinguishing from the outside, the exterior sheeting of the gym was excavated, and crews worked their way inside to put out hotspots, the last of which were eliminated Thursday morning.

Dufrene said the fire appeared to start in the kitchen area.

“All of us at the Fire Department wish there was more that could have been done to save the items inside the gym,” Dufrene said. “Everyone out there last night really felt for Perry’s Posse and the great cause they represent.”

Before his passing, Perry requested Roccaforte start a charity to lessen the financial and emotional burdens of others with the disease.

LeBouef said patient numbers have spiked in the past two months, many of them being children.

She said Perry’s Posse will likely host another fundraiser to pay back approximately $3,000 worth in tables borrowed from a local church, a fireworks stand and the Knights of Columbus Hall in Lutcher.

Costs for demolition of the Garyville Gym are unknown at this time.

“We appreciate all the prayers,” Torres said. “We’re going to get through this.”

While Perry’s Posse was able to collect close to $6,000 from people shopping during the garage sale set-up, and LeBouef said those funds should go directly to the cancer patients.

The furniture was to be stored in the gym as big-ticket items for the next garage sale, making it vital to secure a new space.