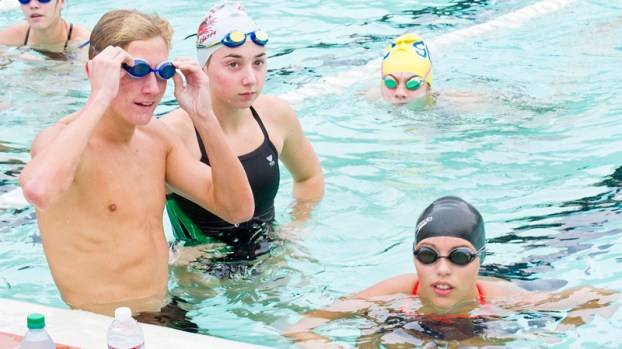 Held at the University of New Orleans, the District Championships were in a place to prove swimming prowess without the rigid qualification requirements of state, according to coach Michelle Jensen.

“It really is a great accomplishment to place at District,” Jensen said. “It’s a numbers game, because you’re able to get creative and put four swimmers in each event to get the most points. That was an asset for us.”

Jensen was especially impressed with senior Kelsie Williams, who set a personal best time of 2:28.56 minutes and placed first in the women’s 200-yard individual medley.

“Kelsie did very well in the backstroke, as well, but she really kicked it up a notch in individual medley,” Jensen said.

“There were two people really on her tail. The last part of individual medley is freestyle, which is not her specialty, but she was able to hold them off.”

Williams placed second in the 100-yard backstroke with a time of 1:07.66 minutes.

According to Jensen, the 500-yard free was another top event where freshman Aubrey Westbrook, seniors Bailey Bourgeois and Hannah Lowry and eighth grader Mia Oncale all made their best times.

Oncale and Westbrook, two of the youngest on the team, qualified for state prior to performing well in freestyle and individual medley at District.

In the 200-yard freestyle, sophomore Courtney Brouwer, juniors Caroline Roberts and Anna Guidry and senior Maddie Sympson finished with a time of 1:51.69 minutes.

Westbrook joined Williams, Lowry and Bourgeois in the 400-yard freestyle to take second, with only Vandebilt Catholic High School finishing ahead.

E.D. White took first in the 200-yard medley, but the Comets followed close behind with the dream team of Williams, Guidry, Sympson and junior Mallory Fernandez.

Fernandez and Guidry shined in the 100-yard breastroke, placing second and third with times of 1:19.18 and 1:19.44 minutes, while junior Olivia Keating placed fifth in the event.

Guidry also came in second on the 50-yard freestyle with a time of 27.13 seconds, an event where Brouwer took fourth place.

Fernandez and Sympson finished strong once again at fourth and fifth in the 100-yard butterfly.

Roberts and freshman Faith Reid competed in the 50-yard freestyle, coming in with times of 28.46 seconds and 29.07 seconds, respectively.

Jensen said the Comets boys missed a second place finish by only 24 points, and she was especially impressed with juniors Collin Cedatol and Jack Chapman.

Cedatol also came in fourth in the 100-yard butterfly and fifth in the individual medley.

The 200-yard freestyle was a tougher event for the boys, with Thomas Chapman and Dominic Boesen bringing SCC into the mix with ninth and tenth place finishes. Several SCC boys placed within the top nine in the 100-yard backstroke, including Duncan Lowry at fifth, junior Evan Brady at sixth, eighth grader Matthew Schexnayder at seventh and Trey Lowry at ninth.