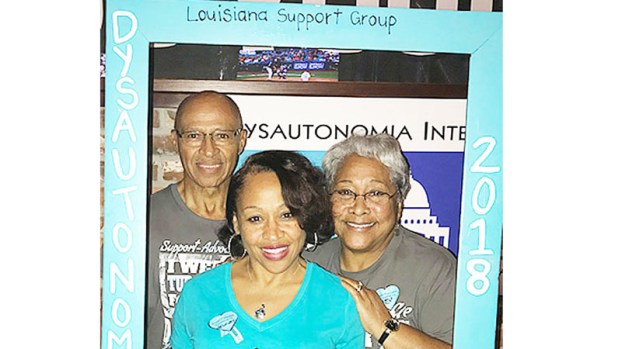 Carey Gauff, Jeunay Roberson and Beverly Gauff are a St. John the Baptist Parish family hoping to spread the word about dysautonomia awareness.

Jeunay Gauff Roberson and her parents, Carey and Beverly Gauff of Reserve, participate in awareness efforts to reach locals who may unknowingly be suffering from the disease.

Jeunay sought medical opinions from a cardiologist after she passed out standing in a store, but the answer to her mystery illness didn’t come until she met a woman with dysautonomia who suffered from the same symptoms.

Defined as a malfunction of the automatic nervous system, dysautonomia has 15 forms and is linked with symptoms that can change minute-by-minute.

“Don’t let them tell you that you have anxiety or you’re just stressed out,” the woman told Jeunay.

Jeunay, who has since moved to Slidell, will never be able to go on a cruise or ride in a parade, but her automatic nervous system is under control with four prescriptions and five daily supplements.

This month, Jeunay and her parents attended an awareness event at Walk-Ons in New Orleans, ending with the Superdome being cast in the dysautonomia teal awareness color.

Carey said presenting information to the media and local organizations is the best way to reach others battling the same symptoms as his daughter.

“My wife and I have learned a lot about this condition, and it’s important to us because there are a lot of people out there who have this disease and don’t know it,” Carey said.

Jeunay said no one knows about her condition unless she tells them.
“Never judge people on the outside because you never know what’s going on within,” Jeunay said.

“I want people to become more knowledgeable because doctors are treating it symptom by symptom without knowing the extent of what it is.”