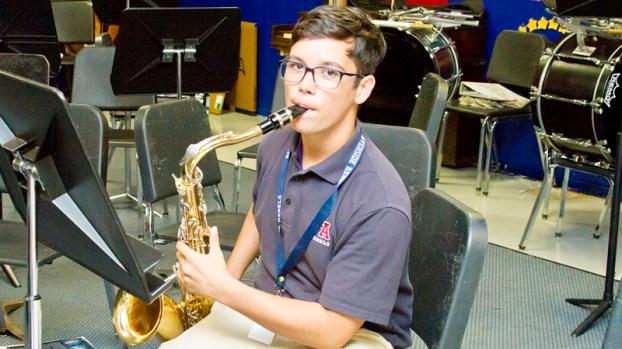 Bryce Duhon is shown in the Riverside Academy band room with his saxophone.

RESERVE — Riverside Academy senior Bryce Duhon knew from a young age that he wanted to be part of the professional sports world, but not as an athlete running down a football field.

He’s interested in the behind-the-scenes business decisions that lead up to the big game.

“There are two sides of sports — what you see on TV and what you don’t see,” Duhon said.

“Ever since I was little, my dream has been to work in the front office for an NFL or NBA team. I watch sports every single day of my life, and I’m also interested in business, so I think that’s the perfect combination between the two worlds.”

Duhon envisions himself interacting with athletes, asking them what works and what doesn’t so he can build a player-friendly team brand.

Next fall, he plans to attend Louisiana State University to study sports administration.

He can build off of his experiences from Boy’s State, where he collaborated with students from around Louisiana at Northwestern State University to form a functioning government.

“It’s all about leadership in government,” Duhon said.

“You create the 51st state by making different parishes and different cities and electing your officers. You have a court system and a Senate. At the end, you realize you’ve become a brotherhood.”

“Bryce sets extremely high standards for himself and doesn’t accept mediocrity,” Clement said. “He takes initiative and looks for what needs to be done, instead of just floating by. He’s leading several organizations on campus, and that’s a testament to his leadership ability.”

His excellent ACT performance earned him a spot in Riverside Academy’s 30+ Club.

Duhon is a member of the Fellowship of Christian Athletes and Drama Club, which has led to his involvement in school productions and summer musicals.

However, Duhon said he most enjoys serving as drum major and playing saxophone in the band.

“Most people think band is just about playing instruments and marching across a field, but band is really a big family,” Duhon said. “It’s not just about what we do physically; it’s about the emotional connections between us.”

Duhon said Clement’s leadership inspires him because they are perfectionists who love to stay busy and work hours on end to better those around them.

When he’s not busy with band, Duhon works hard in dual enrollment college credit courses to maintain a 4.7 GPA.

Classmate Annie Wang said Duhon is intelligent and caring, even though he may sometimes come off as sarcastic.

“He’s actually a softie on the inside,” she said. “He’s really passionate about what he does. In the future, I see him being a successful person.”

Duhon is the son of George and Raelynne Duhon of LaPlace.

J.J. Robertson’s mom says son has nothing to do with DEA raid of “It Takes Lives To Save Lives”

LAPLACE — The mother of Jarrius “J.J.” Robertson is adamant her son has nothing to do with the recent raid... read more