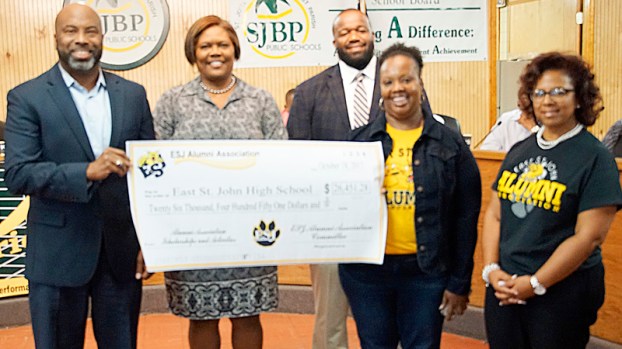 Superintendent Kevin George and School Board President Ali Burl are joined by Melanie Burl, Demetri Robinson Carter and Stacey Millet at the St. John School Board meeting on Oct. 18.

Formed only a year ago, the group announced its presence in a big way during a sponsored 2017 game, drawing more than 3,000 people Sept. 29, the most in the school’s recent history.

Organizers asked for a $25 membership fee that included a ticket to the game and collected approximately $20,000, which was distributed to the Wildcats’ athletic department and sponsored several academic scholarships.

Well, the ESJH alumni didn’t stop there, as the 2018 sponsored game topped the previous year’s attendance and participation, with more than 1,100 alumni paying their $25 fee (there were 709 participants in 2017).

$5,950 goes to the athletic department for ticket sales and $20,500 is earmarked for East St. John High School student scholarships.

Superintendent Kevin George said District personnel constantly stress “the power of you and what that means.”

“This is a group that said, ‘we want to help out,’ did something about it and took some positive action,” George said. “I really appreciate everyone involved. I know it is a lot of work. You guys have worked so hard to make that event come true. It’s just amazing.”

Forty is more than a milestone birthday — it’s the start of a big decade of change for a woman’s... read more