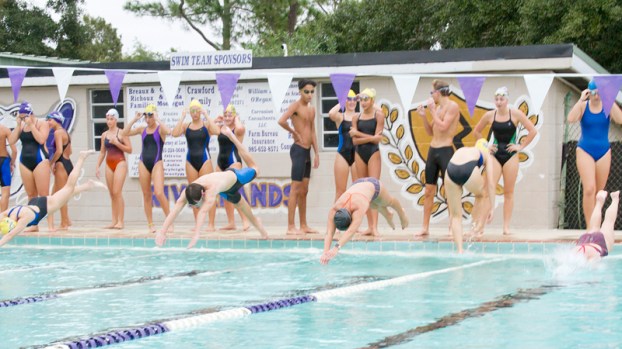 St. Charles Catholic swimmers dive into the pool during practice after school on Oct. 17 in LaPlace.

Kelsie Williams is looking to finish her SCC swimming career strong during the state meet next month.

Each summer since age 4, Williams has competed with the LARAYO Barracudas, a local swim group that has gone undefeated in the River Parish swim league for nearly two decades.

Williams has been a big part of LARAYO’s success and a fixture of the Comets swim team in the 100-yard backstroke and 200-yard individual medley since eighth grade.

Though it can be exhausting, swimming has afforded Williams countless friendships, and her priority is to finish out her final Nov. 14-17 state meet with record-breaking success.

“Some days, I’m not feeling my best, but I try to push through because I know, at the end, I’m going to miss it,” Williams said, adding the bonds are what she’s come to love the most.

Williams’ favorite memories come from hotel room gatherings with teammates after intense state meets. She especially respects coach Michelle Jensen, who has guided her in the water from the very beginning of her swim career.

“Coach Michelle is not just another coach to me,” Williams said. “She’s basically like another mom to me. It’s not always about swim. We’ll have personal conversations, whether we are at football games or going out to eat.”

Coach Michelle Jensen speaks to her SCC swimmers during practice.

According to Jensen, Williams has earned all-district honors in her respective events. Last year, she shined at state with an all-state designation.

“Kelsie Williams has been a key swimmer for SCC since the eighth grade,” Jensen said. “Last year, she placed third in state as the backstroker on our medley relay team.”

Hannah Lowry, a 2018 senior, stepped into a leadership position this year, according to Jensen.

With many of last year’s seniors gone and a lot of new faces on the team, the Comets had a lot of rebuilding ahead of them.

“Being a leader means to have confidence in everyone on the team,” Lowry said.

“We’re good at helping the younger people on the team learn new things.”

Lowry qualified for state in the 200-yard freestyle during a swim meet held last week at Nicholls State University.

Entering the week, she and others on the team were preparing for a District meet against top teams Vandebilt, Lusher and ED White and a metro meet to be held this weekend at the University of New Orleans.

“It’s an honor to make metro,” Jensen said. “There are a lot of different schools competing and a lot of 5A and 4A schools. We’ve already had kids qualify for state, but more are eligible to qualify through Nov. 7.”

Williams, Lowry, Bailey Bourgeois and Aubrey Westbrook have helped carry the girls, while Jack Chapman and Collin Cedotal have been standouts for the boys.

Eighth grade state qualifiers include Bella Marix in the 100 breast and Mia Oncale in the 200 free and 500 free.

“This season has been going well, and they have been doing their best,” Jensen said.

“We’re working on finding the best fit for our relays. The biggest challenge is that we have so many multisport athletes, and not everyone can make every practice.”