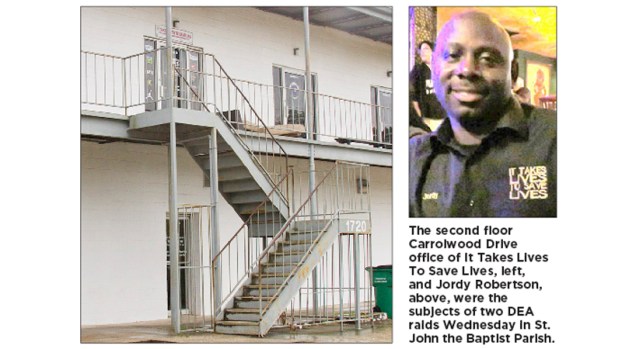 It Takes Lives To Save Lives

LAPLACE — Thursday and Friday were the quiet that followed the storm that was Wednesday for “It Takes Lives To Save Lives” — a LaPlace-based organization that bills itself as a nonprofit promoting organ donation.

J.J. — a national celebrity making public appearances throughout the River Region and nation — was born with biliary atresia, a rare liver disease found in infants. He received a partial liver transplant (a piece from a donor) at 1 and spent a year in a coma. The disease stunted his growth to where J.J. looks much younger than he is.

With organizations like the New Orleans Saints, National Football League and World Wrestling Entertainment backing him, J.J. was put front and center into the national consciousness promoting organ donation.

A visit to ittakeslivestosavelives.com promotes that story with a consistent message:

• 22 people die every day while waiting for a transplant.

• 1 organ donor can save 8 lives and change the lives of more than 50 people.

Yet, it was a different visitor that created headlines this week — the DEA.

Multiple agencies, including local and federal and led by the Drug Enforcement Administration, raided the It Takes Lives To Save Lives LaPlace office and Jordy Robertson’s Reserve home on Wednesday.

Debbie Webber, DEA spokeswoman for the New Orleans field division, said there is an ongoing federally led investigation, which led to the law enforcement action.

The St. John Sheriff’s Office played a back up role in the law enforcement action, with Sheriff Mike Tregre saying a number of federal agents were involved.

Jordy Robertson did not respond Wednesday or Thursday to L’OBSERVATEUR requests to comment.

Jordy did speak with a New Orleans television station, saying the IRS and other agents arrived at 9 a.m. and didn’t stay long, focusing on his taxes and the organization. He said he is unaware of what the exact allegations are and had secured a lawyer. He maintained his innocence.

One person who was candid in speaking with L’OBSERVATEUR was Donaldsonville’s Patricia Henry, who is J.J.’s mother.

“I can’t stop his dad from putting his pictures up. I’ve tried, but it doesn’t happen. I can protect my child’s name. He has nothing to do with that foundation. It’s all his dad.”

Henry stressed J.J. lives with her in Donaldsonville.

“I don’t know what is going on with his dad or what’s going on with the federal investigation,” Henry said, adding she would reserve extended comment about the law enforcement raid but added, “I’m not surprised.”

Jordy Robertson has previously been very outgoing with L’OBSERVATEUR and all media when it came to promoting It Takes Lives to Save Lives, securing appearances with many of the leaders in St. John the Baptist Parish for either himself or his son.

“We couldn’t just sit around and wait for the hospital to find us a liver,” Jordy told L’OBSERVATEUR previously. “We had to get the word out about organ donation and transplants. If I can touch somebody and help get the word out, it won’t just help Jarrius, it will help others and let people know what these kids are going through right here in our community.”

Jordy stressed he wanted people to check the box on their driver’s license, but he also wanted to create a smart phone app that would allow people he and Jarrius met to sign up on the spot.

“A lot of people say they will sign up, but they don’t,” he said. “They forget about it.

“It’s not just about people battling liver disease. It’s for people who are fighting all kinds of diseases. It takes a life to save a life, to help somebody out. You don’t have to die to save somebody’s life. You can give blood. You can be a living donor. Jarrius is an inspiration to a lot of people, but we are inspired by a lot of people too.”