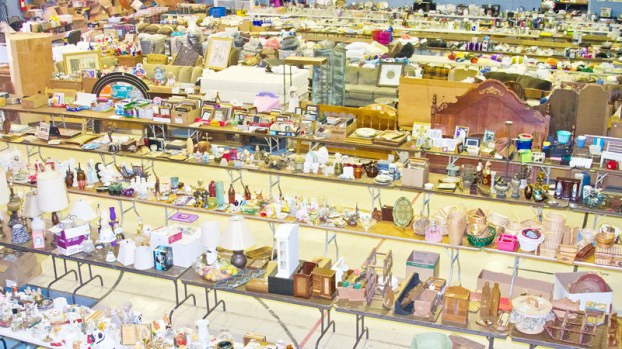 Rows and rows of items are ready for sale at the Garyville gym, 127 GYO Road in Garyville, which officially kicks off Nov. 2-4 as part of Perry’s Posse newly instituted biannual sale to raise money in support of River Region cancer patients.

Giving Back: HUGE garage sale looks to raise thousands in fight against cancer

GARYVILLE — “Where did you get all this stuff?” is the question Joan LeBouef and other Perry’s Posse members hear each time locals stop by the Garyville Recreation Center Gym, staring in awe at thousands of garage sale items packed from wall to wall.

LeBouef tells them every donation comes from kindhearted community members inspired by Perry’s Posse’s mission to provide nonprofit spiritual and financial support to active cancer patients in the River Parishes.

This year marks the first time the Perry’s Posse garage sale fundraiser has been held biannually since its inception in 2014. A $6,000 goal set for the most recent garage sale, held in March, sweltered to more than $14,000 in earnings.

The next garage sale is being held from 8 a.m. to 1 p.m. Nov. 2-4 at 127 GYO Road in Garyville, and LeBouef said proceeds have already exceeded $2,000 prior to opening from people shopping while dropping off donations.

Final donations are being accepted onsite today through Friday (Oct. 26).

Perry Posse organizer Joan LeBouef adjusts some of the items for sale next month in Garyville.

“If we didn’t have people shopping already, we wouldn’t have been able to fit everything,” LeBouef said, estimating the fundraiser has grown four times in size over four years. “Kindness matters. There’s a lot of negativity in this world, but people really do care and want to help. The reason we’re able to get all this is because there are hundreds of people who have family members with cancer that we have touched.”

LeBouef has mourned patients who have passed and celebrated as others went into remission, recounting her own experience as an eight-year survivor.

No matter the circumstances, each patient receives gas money for treatment transportation, a spiritual guidebook, care packages for Thanksgiving, Christmas and Easter and a birthday card.

According to LeBouef, patients receive surprise monetary gifts when resources allow for it.

Joan and Terry LeBouef set up for the Perry’s Posse garage sale, which is slated to launch Nov. 2-4 in Garyville.

Perry’s Posse member Trudy Torres said annual expenses are close to $25,000, adding it wouldn’t be possible to provide services without the generosity of the community.

Other upcoming initiatives include a Perry’s Posse meet-and-greet party for cancer patients, aimed to introduce them to support from others going through the same experiences.

According to Torres, the next big goal is to expand Perry’s Posse services outside of the River Parishes.

That goal requires a great deal of fundraising, but Torres believes the garage sale success indicates Perry’s Posse is on the right track.

“I think people respond so well because every family knows someone who has been touched by cancer,” Torres said, adding she has lost a brother, father and husband to the disease.

Perry’s Posse was established in 2014, after founder Tanya Roccaforte’s late nephew Lawrence “Perry” Levet Jr. expressed a desire for a charity to lessen the burdens of others with the disease.

“Everyone knows what the struggle is, and everything we raise goes back to the cancer patients. We don’t keep any for ourselves because it’s all on a volunteer basis,” Torres said.