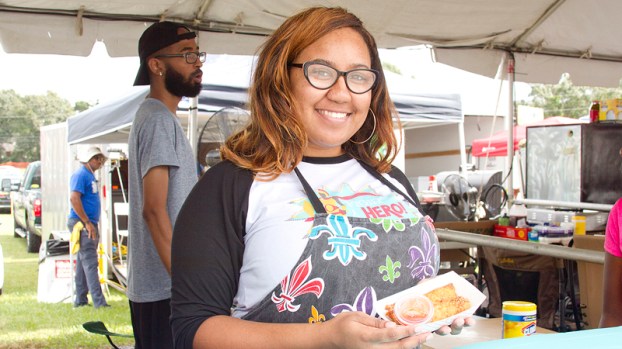 Briante Kimble of Diva Delights Catering made sure to cook up plenty of her Andouille jambalaya eggroll dishes.

LAPLACE — While in culinary school, Briante Kimble of LaPlace watched YouTube videos for inspiration to build her own brand of signature food combinations.

The weekend marked Kimble’s second year joining the Festival. As one of 28 food vendors, she promoted her locally owned business, Diva Delights Catering.

Morgan Newton, above, of 4 of Us Catering was on hand this weekend sharing her food.

St. John the Baptist Parish Councilman Lennix Madere Jr. said there was a strong turnout Friday night and Sunday, while the threat of rain Saturday held back attendance.

Yet, Madere said those who did come out offered positive feedback on the rides, music and food.

“I haven’t heard any negative comments, and I think it was just as successful as the previous Festival last year,” Madere said.

“It brings the whole parish together, East Bank, West Bank, all in one location. There’s unity when people enjoy the same things at the same time. People liked the fact they had more rides for the kids and said the food was good, especially the booths that had jambalaya and pastalaya. We had cracklin in one of the booths from the West Bank that’s always a big seller. I think people were pleased.”

Faith Becnel & The Music Krewe were one of the weekend’s performers at the Andouille Festival.

“Attendance was impacted by rain on Saturday, but Friday night and Sunday brought large crowds to the festival grounds, boosting sales by our local businesses, non-profits and school organizations that rely on this as one of their annual fundraisers,” Robottom said, adding staff, entertainers, vendors and volunteers worked hard for a successful festival.

Official turnout numbers were not determined by Monday, according to St. John Communications.

Amid the threat of rain on a hot Saturday afternoon, Paul and Taylor Shirer of LaPlace were among those who turned out for the Festival, along with their 22-month-old son, Jax.

Paul, Taylor and 22-month-old Jax Shirer, all of LaPlace, took in the festival fun on Saturda

“We’re from the area, so we’ve been coming to this Festival forever because we love the food and the bands,” Taylor said.

“This is our son’s first time, and he liked the food, too. There’s definitely no other festival like this one, because every single food vendor has something related to Andouille. No other festival advertises like that.”

The Shirer family also enjoyed children’s rides new to the 2018 festival, focusing much of their time by the towering fun slide.

While many families have made the Andouille Festival a tradition, others including Charles and Tammy Lane ventured to St. John the Baptist Parish from neighboring regions.

Charles and Tammy were first-time visitors from Jefferson Parish, but they plan to be back in the area soon to get another taste of Mama Jo’s Family Creole Kitchen’s southern cooking on U.S. 51 in LaPlace.

Charles and Tammy Lane sampled the crawfish bisque and chicken wings during their festival adventure.

The pair savored crawfish bisque and fried chicken wings at the Festival but did not get a chance to enjoy Mama Jo’s smothered okra with Andouille sausage, potato salad or crab and shrimp stew.

“They gave me a card for her restaurant, so I’ll be back out this way no later than next week,” Charles said.

“We like to go out every weekend and eat somewhere, and this was really good.”

Gaynell Noble turned out to help her younger sister, Triniece Noble, grow her meal prep, wedding and event catering business. The goal, according to Gaynell, is to one day secure a storefront in LaPlace.

Candace Eugene, Gaynell Noble and Denise Smith teamed up to serve from the T&2J’s Enterprise tent at this year’s Andouille Festival in LaPlace.

“We told everybody, it’s not a boudin ball; it’s a jambalaya ball,” Denise said. “I’ve been around LaPlace my entire life, and I’ve never seen anyone else make this.”

After a long period of not attending the Festival, Ryan Bonfiglio of LaPlace returned to introduce his wife, an Egyptian immigrant, to classic Louisiana food and music.

The threat of rain Saturday deterred some guests from what was an otherwise busy and successful Andouille Festival weekend.

He tried the Andouille Papa John’s pizza but was most impressed with the chicken Andouille gumbo from Wayne Jacob’s Smoke House.

Councilman Larry Sorapuru Jr. said he’d like to see increased involvement with local schools and choir groups in future years, but he’s pleased with the turnout and did not hear any suggestions for improvement.

KILLONA — A main highway running through the River Region’s West Bank was twice the scene of deadly crashes this... read more